The systems of QRSAM are equipped with indigenously developed technology that will help the Indian Navy in Inertial Navigation System.

According to the information released by the Indian Navy, two QRSAM missiles were tested against live targets. The systems of QRSAM are equipped with indigenously developed technology that will help the Indian Navy in Inertial Navigation System, Data Link and RF seeker.

• Quick Reaction Surface to Air Missile (QRSAM), with a strike range of 25 km, is being developed by the DRDO for the Indian Army.
• The all-terrain and all-weather missile with electronic counter-measures against jamming by enemy aircraft can be mounted on a truck and stored in a canister.
• Before this test, on February 26, two rounds of tests were successfully carried out.
• This missile can be rotated 360 degree while on the way to its target.
• QRSAM is also able to use as an anti-sea skimmer from a ship against low flying attacking missiles. QRSAM employs dual thrust propulsion stage using high-energy solid propellant. 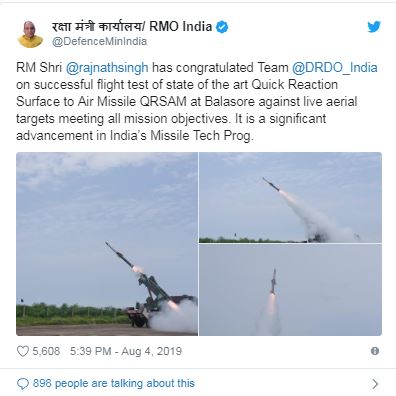 DRDO conducted two different tests for different altitude and conditions. DRDO closely observed both tests and found that flights successfully demonstrated the Aerodynamics, high manoeuvring capabilities, Robust Control, Structural performance and Propulsion thus proving the design configuration. Electro-Optical Systems, Radars, Telemetry and other equipment have monitored and tracked the missiles through the entire flights. DRDO announced that all the mission objectives have been met.