PM Modi and Saudi Crown Prince Mohammed bin Salman had a bilateral meeting at G20 Summit 2019. This meeting of both leaders was important because Saudi Arabia is India's top supplier of crude oil but the two countries have expanded their relationship beyond this. 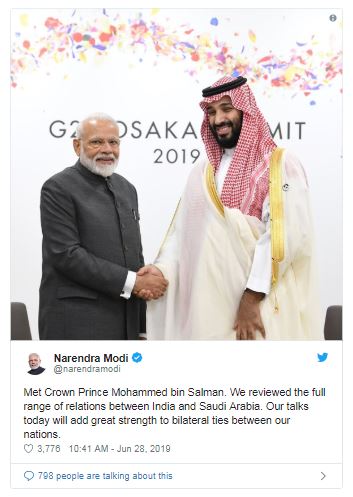 Saudi Arabia is India's top supplier of crude oil but the two countries have expanded their relationship beyond energy, and their governments have agreed to build a strategic partnership. Official Spokesperson of Ministry of External Affairs (MEA) Raveesh Kumar Tweeted, “An invaluable strategic partner. PM @narendramodi met with Crown Prince of Saudi Arabia Mohammed bin Salman Al Saud on the margins of the #G20. Discussed deepening cooperation in trade & investment, energy security, counter terrorism, among other areas.” 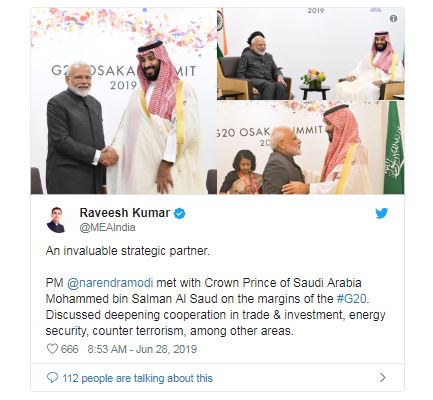 The meeting with Mohammed bin Salman assumes special significance as they have earlier in the past discussed the need to co-operate in cracking down on terror. Salman had also pledged an investment of $100 billion in his February visit to India. The investment was to be done in various sectors including energy, infrastructure, and agriculture. The Middle Eastern nation had also ordered the release of 850 Indian prisoners lodged in its jails.

The present bilateral talks, therefore, hold a special significance in the view of earlier talks regarding, trade, counter-terrorism, energy security, and infrastructure.