Vikram Sarabhai: Honoured by Google Doodle, Know everything about him

Google Doodle of Vikram Sarabhai has been illustrated by Mumbai-based guest artist Pavan Rajurkar. Dr Vikram Sarabhai is also known as the father of the Indian space programme 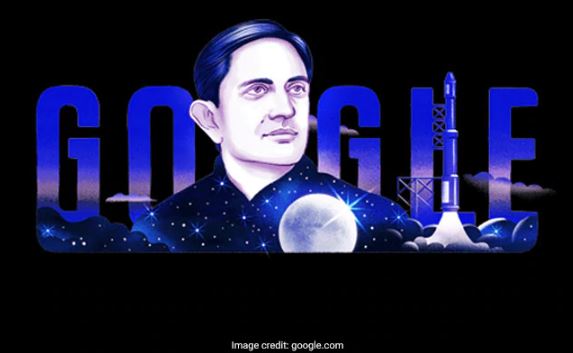 Google has paid its tribute to the founder of ISRO Vikram Sarabhai by a Google Doodle. Google is celebrating the 100th birth anniversary of award-winning Indian physicist, industrialist, and innovator Vikram Sarabhai. Dr. Vikram Sarabhai is also known as the father of Indian space programme as he established the Indian National Committee for Space Research which was later renamed as ISRO. Sarabhai’s Google Doodle has been illustrated by Mumbai-based guest artist Pavan Rajurkar.

About Vikram Sarabhai
• Vikram Sarabhai was born on August 12, 1919, in Ahmadabad. His family was dedicated to the Indian Independence Movement.
• Vikram Sarabhai earned his bachelor’s degree from a Gujarat College before travelling to England to earn his doctorate at Cambridge.
• He founded Physical Research Laboratory in Ahmadabad at the age of 28.
• He was much interested in cosmic rays, rockets, and satellites. Dr. Sarabhai believed in using science and technology as levers of development.
• Father of India's nuclear science program, Dr. Homi Jehangir Bhabha, supported Dr. Sarabhai to establish the first rocket launching station in India.
• As a result, the Thumba Equatorial Rocket Launching Station was established in southern India, which had its first successful launch on November 21st, 1963.
• Vikram Sarabhai’s dream of an Indian satellite was realized when Aryabhata went into orbit in 1975.

Awards and Achievements
• Dr Vikram Sarabhai received the Shanti Swarup Bhatnagar Medal in 1962.
• Dr Vikram Sarabhai was honoured with Padma Bhushan in 1966 and Padma Vibhushan (posthumously) in 1972.
• The Satellite Instructional Television Experiment (SITE) was launched during July 1975 - July 1976 as a result of Dr. Sarabhai's dialogue with NASA in 1966.
• Vikram Sarabhai always wanted to spread science education in the country and founded a Community Science Centre at Ahmedabad in 1966. This centre is known as Vikram A Sarabhai Community Science Centre today.

Some institutions established by Dr. Sarabhai