The projects will cover Highways, Shipping and Port. They are also aimed at finding a permanent solution to the irrigation and drinking water requirements of the state. 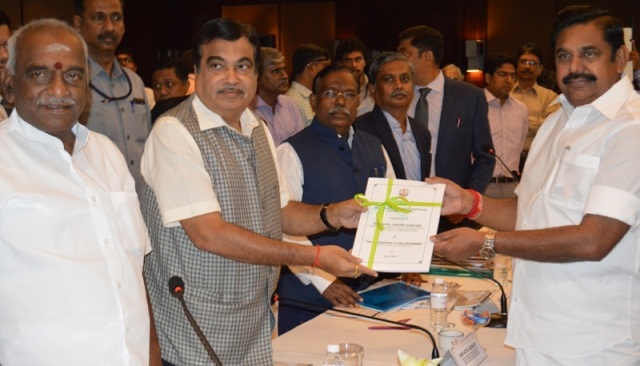 The Union Government has approved Highway and Shipping Projects worth more than Rs 1 lakh crore for the state of Tamil Nadu.

The information was shared by Transport Minister Nitin Gadkari while addressing a joint press conference with Tamil Nadu’s Chief Minister Edappadi K Palaniswami after a review meeting of the Central and State government.

The projects will cover Highways, Shipping and Port. They are also aimed at finding a permanent solution to the irrigation and drinking water requirements of the state.The total expenditure of the projects is expected to be around Rs 40,000 crore.

Following are the proposed projects with cost details:

2. The Tambaram- Vandalur, Vandalur -Guduvanchery section of the Highway will be upgraded to 8 lane Highway at a cost of Rs 72 crores. The move is expected to solve the traffic congestion at the Tambaram -Perungalathur bridge.

3. The Chennai- Bengaluru Expressway will be constructed at a projected cost of Rs 20,000 crore. The move is expected to boost industrialisation and development activities along the Expressway.

4. The Koyambedu- Poonamalee -Wallajahpet road will be converted to a six-lane road at a cost of Rs 1500 crore to ease the congestion in the extended suburban areas of Chennai.

Tiruchi-Chidambaram Highway project: The budget outlay of the project is expected to be around Rs 4000 crore

Upgradation of the Villupuram- Nagapattinam section: It is expected to be completed at a cost of Rs 6000 crore.

Six-laning of Chennai-Tada national Highway: The allotted budget for the project is Rs 500 crore.

Besides this, ring road development will also be taken up in Madurai, Tiruchi and Salem.

• The Union government would be sanctioning Rs 2000 crore to the Tamil Nadu Public Works Department (PWD) to develop the Dindigul-Kottampati road into a National Highway.

• Almost 1300 kms of State Highways will be upgraded to National Highways. The highways that will be upgraded include Perambalur- Attur (55kms), Thoppur- Mettur-Erode (85kms), Tirupur-Ottanchatiram (91kms) and Salem-Vanniyampadi (141kms).

• The centre will also be sanctioning amount worth Rs 2300 crore to the state to take preventive measures in 61 identified black spots where frequent accidents take place, in order to reduce the number of traffic accidents.

• The detailed project reports for the creation of Madurai, Coimbatore and Salem bus ports – terminals with the latest facilities like an airport will be prepared and submitted soon.

• The state’s three ports will be enhanced to facilitate exports and industrialisation and value addition under the Sagarmala programme.

• The depth of the Tuticorin port, the second-largest port in Tamil Nadu, is also going to be increased from 14m to 16.5 meters at a cost of Rs 3000 crore. It would help the port handle 1,30,000 tonnage vessels from the present capacity of 60,000 tonnage ships and reduce logistic cost by 30 percent.

• Coastal berths are also being built at Cuddalore port at a cost of Rs 115 crore, following which similar facilities will come up at Chennai and Tuticorin ports as well.

Besides this, the Union government has decided to transfer surplus water from Godavari River to River Cauvery through Krishna and Pennar Rivers to solve the water problem in Tamil Nadu and other southern states. A meeting of the Chief Ministers of Andhra Pradesh, Telangana, Kerala and Tamil Nadu will be convened soon to discuss the project.

Initially, about 300tmc of water has been proposed to be lifted from Godavari River and be released into the Nagarjuna Sagar Dam on River Krishna. From there the water would be taken up to Somasilam project on River Pennar and from there to Grand Annaicut on River Cauvery.