GSAT 30 launched: All you need to know!

GSAT-30: The Indian Space Research Organisation (ISRO) has successfully launched ‘GSAT-30’ from French Guiana on January 17, 2020. The launch of the high power communication satellite is ISRO’s first satellite launch of the year 2020.

GSAT-30 communication satellite was launched aboard Ariane 5 launch vehicle (VA 251) from French Guiana early morning on January 17. The satellite with an approximate weight of 3357 kg will have a mission life of more than 15 years.

GSAT 30 will serve as a replacement to INSAT-4A spacecraft services with enhanced coverage. The satellite was launched along with the European Space Company’s telecommunication satellite- Eutelsat Konnect. 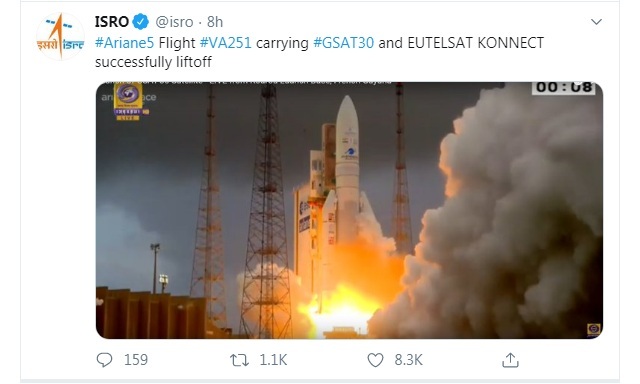 • GSAT-30 is an operational communication satellite with a mission life of up to 15 years. It has been configured to give a boost to communication services such as television uplink, DTH,  digital satellite news and VSAT. It weighs approximately 3357 kg.

• The satellite derives its heritage from ISRO's previous INSAT/GSAT satellite series. It will replace INSAT-4A spacecraft services with enhanced coverage.

• It will mainly provide Indian mainland and island coverage in Ku-band.  It will also provide extended coverage in C-band, which will help television broadcasters to broadcast their programmes across India, Australia, Gulf nations and a large number of Asian countries.

• The satellite was launched by ISRO in collaboration with the European aerospace company Arianespace. The launch marks Ariane V launch vehicle’s 107th flight.

• The launch vehicle first placed GSAT-30 in its designated orbit, followed by the release of Konnect. The full mission lasted for approximately 38 minutes and 25 seconds from liftoff to final separation. GSAT 30 successfully separated from the upper stage of Ariane 5.

The communication payload of the satellite has been specifically designed and optimised to maximise the number of transponders on the spacecraft bus.

The Indian space agency has planned to work on as many as 25 missions in 2020, including Chandrayaan 3 and Gaganyaan mission simultaneously.

ISRO Chairman K Sivan, however, stated that the planning for the first unmanned mission, which was slated for this year, may slip over to next year.