Hong Kong protests: Know everything about it

Hong Kong Protests: Hong Kong airport, one of the busiest airports in the world was shut down on August 12 and 13, following mass violent protests.

Hong Kong Protests: Hong Kong airport, one of the busiest airports in the world was shut down on August 12 and 13, following mass protests that turned violent with two men being detained, harassed and assaulted for long hours by the protestors.

An apology was issued by the protesters to all the travelers on Wednesday morning, in which the protestors apologized for causing disruptions and inconvenience at the airport and also issued an apology for the incidents that appeared aggressive. The protestors stated that undercover police infiltrated their protests, raising doubts on whether they were also instigating demonstrators. 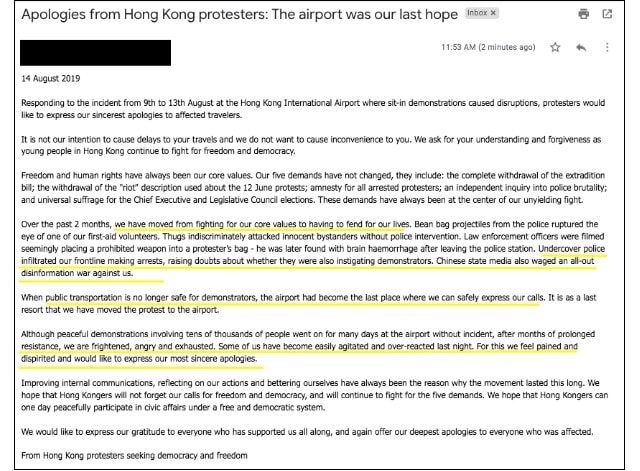 The protestors further stated in their apology letter that they had moved their protests to the airport, as it was their last resort as other public transport facilities were now unsafe. The Hong Kong Police retaliated to the mass protests at the airport with a violent crackdown on the demonstrators, triggering fresh outrage towards the authorities.

The court order also authorizes the Hong Kong police to arrest anybody "reasonably believed" to be violating the rules.

The airport shutdown affected thousands of passengers with nearly 200 flights being cancelled. The flights have now resumed and all the airlines are attempting to reach out to the stranded passengers.

Hong Kong Protest reason: Why are the protests happening?

The protests had begun in Hong Kong in early June over concerns regarding a bill that would allow individuals to be extradited to mainland China. The proposed law has been suspended.

The protests have a lot to do with Hong Kong’s history. Hong Kong was a British colony until 1997, after which it was handed back to China under a policy called “one country, two systems”. The policy offers the residents of Hong Kong a greater degree of independence than they would have in China. The policy though made Hong Kong a part of China but it let it keep many of liberties that are denied to the Chinese citizens including freedom of speech, unrestricted internet access and the right to free assembly. Hong Kong has its own set of laws, police, system of governance and currency under a mini-constitution called the Basic Law.

Though China agreed to keep the policy intact at least till 2047, many residents of Hong Kong feel that China is slowly taking away its autonomy and that the local government is in its favour. In February 2019, the local government in Hong Kong introduced a bill in the legislature that would allow people accused of crimes to be sent to places with which Hong Kong had no extradition treaty including China, where the courts are controlled by the Communist Party.

When did the protests begin and how did they turn violent?

The protests had initially begun in June after residents of Hong Kong felt that the newly proposed law will jeopardize Hong Kong's autonomy from China and would endanger Hong Kong-based critics of China.

The Hong Kong officials had initially defended the bill saying that it would protect them from criminals escaping from legal systems at other places. The officials insisted that the bill would not be applied to issues concerning free speech but it did not convince the protestors.

The protests only grew post that with the fear settling among people that their government was advancing the agenda set by China and not working for its people. The protests led Hong Kong’s chief executive Carrie Lam to suspend the extradition bill but she refused to withdraw it entirely.

The protestors have now widened their demands and called for five key changes:

1. Full withdrawal of the extradition bill.

3. Amnesty for all arrested protestors.

4. Independent investigation into the alleged police brutality during past demonstrations.

The protests turned violent in most instances after the Hong Kong police deployed forceful tactics such as the use of tear gas and other violent means.

Have all the protests been violent?

While the protests turned violent in some instances, the vast majority of the protestors have been peaceful and they include elderly residents and families with children. A peace march, organized on June 6 was one of the biggest protests organized in the history of Hong Kong, as it saw participation by almost two million people.

US response to the protests

US President Donald Trump reacted to the protests by saying “Many are blaming me, and the United States, for the problems going on in Hong Kong. I can’t imagine why?” Trump also tweeted saying that the US Intelligence has informed that the Chinese Government is moving troops to the Border with Hong Kong. He asked everyone to be calm and safe!

China’s response to the protests

China has started showing its intolerance towards the protests. China condemned the protests, calling demonstrators "criminals" and "separatists" who are showing "signs of terrorism."