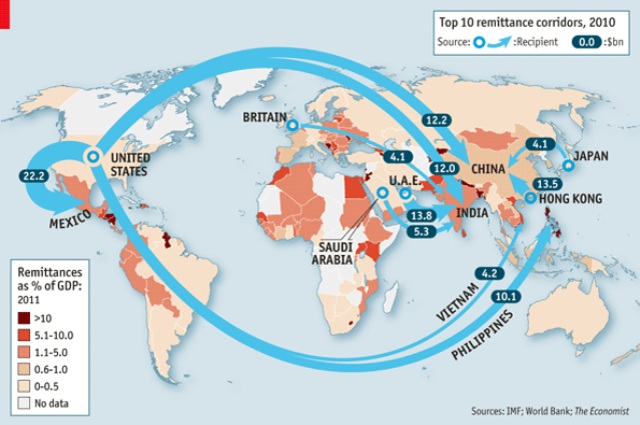 India is likely to maintain its place as the top remittances receiving nation, with its Diaspora set to pump in a whopping USD 65 billion in the year 2017, the World Bank said today.

Ahead of the annual summit of the International Monetary Fund (IMF) and the World Bank, a report published by the global lender said that remittances, which include flows to high-income countries, are projected to grow by 3.9% to USD 596 billion.

However, as a share of GDP (gross domestic product) for 2017, the top 5 recipients are smaller countries- Tajikistan, Nepal, Kyrgyz Republic, Haiti and Liberia.

The bank said that the remittances increase to the South Asia region, will be moderate at 1.1% to USD 112 billion this year, due to systematic impact of lower oil prices and 'nationalisation' polices leading to controlled labor market situation in the Gulf Cooperation Council (GCC) countries.

The report also pointed out that the remittances the world’s largest remittance recipient country India will grow by 4.2% in 2017 to USD 65 billion, following a decline of 9% in 2016.

• Remittances to Pakistan are likely to remain flat this year, while Bangladesh, Sri Lanka, and Nepal will see a decline.

• The economic deceleration in the GCC has badly impacted migrant worker flows from the South Asia Region.