Indo-Thailand Joint Military Exercise Maitree-2019 will improve the level of defence co-operation between both countries. 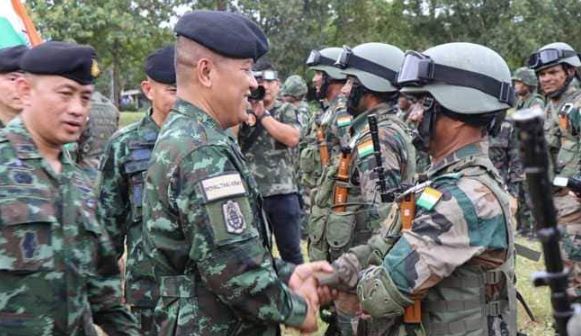 India and Thailand are all set to organize Joint Military Exercise MAITREE-2019 at Foreign Training Node, Umroi (Meghalaya) from 16-29 Sep 2019. Both the countries have already conducted two such military exercises in past one month.

About 100 Indian and Royal Thailand Army (RTA) soldiers will participate in the joint military exercise with an aim to share experience gained during a various counter-terrorism operation in their respective countries. MAITREE-2019 will be the third consecutive army engagement between India and Thailand’s forces. According to the government agencies, it shows warm ties between both of the countries.

• It is an annual Joint Military Exercise which is being conducted alternatively in Thailand and India since 2006.
• Exercise MAITREE with Thailand is significant in terms of the security challenges faced by both nations.
• This military training exercise is also important for India because of its presence in South Asia, in the backdrop of changing facets of global terrorism.
• The importance of MAITREE exercise covers company level joint training on counter-terrorism operations in the jungle and urban scenario.
• It will improve the level of defence co-operation between the Indian Army (IA) and Royal Thailand Army (RTA) which in turn will further foster defence cooperation and bilateral relations between the two nations.

The diplomatic relations between India and Thailand were established in 1947. Both countries have witnessed growing warmth, increasing economic and commercial links. Several agreements for development, exchange of high-level visits on both sides are some other common signs of healthy relations between India and Thailand. Also, Thailand and India are culturally linked for centuries and India has had a deep influence on Thai culture.