Jio GigaFiber: Launch date, Plans, Prices- Jio GigaFiber will be launched on September 5, that provides free voice calling facility to any Indian operator. The JioFiber plan will start at Rs. 700 per month. 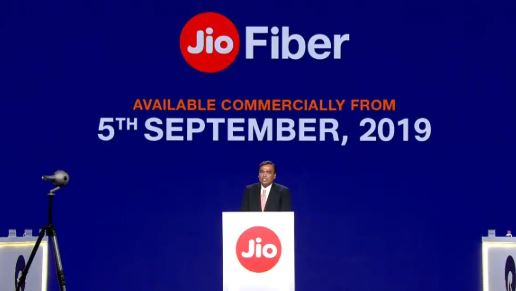 Jio GigaFiber will be launched on September 5, which is also the third-anniversary of Jio services in India. After a wait of almost one year, RIL Chairman Mukesh Ambani finally announced the launch of JioFiber broadband services in India at the 42nd Annual General Meeting (AGM) of Reliance Industries Limited (RIL). This event also marks the announcement of various other disrupting moves from Mukesh Ambani that includes Set-top-box,  jio Post-paid plus, IoT, etc.

• The cheapest data plan of Jio GigaFiber is priced at Rs. 700 per month with speeds capped at 100Mbps.
• The highest price of the package would be around Rs. 10,000 per month with access to broadband, Jio HomeTV and Jio's IoT.
• Jio GigaFiber will provide free voice calling facility to any Indian operator. Mukesh Ambani has also announced for its broadband services with Fiber packages.
• According to the Mukesh Ambani during RIL AGM, “ISD calling tariffs would be 1/5th to 1/10th of industry rates. We are offering unlimited US/Canada pack at Rs. 500 per month.”

RIL Chairman Mukesh Ambai announced that Reliance Jio will offer first day, first show to its customer. According to the JioFiber plan, customers will be able to watch movies that home the same day they are released in the theatres. Mukesh Ambani announced that this service will be launched in the middle of the year 2020.

Mukesh Ambani in another announcement declared that there will be so many benefits with Jio GigaFiber and its various plans. In Jio Fiber Welcome offer plan (Jio Forever Plan) a Jio customer will get Full HD Television or a Home PC and a 4K Set Top-box absolutely free. He also said that Jio customers pay only for data, voice calls across the country from Jio landline phone will be absolutely free forever.