Kargil Vijay Diwas is celebrated to respect and to show gratitude to the brave Indian soldiers of Indian Army who sacrificed their lives to keep India safe and secure.

Every year this day is celebrated to respect and to show gratitude to the brave Indian soldiers of Indian Army who sacrificed their lives to keep India safe and secure. Military personnel celebrate Kargil Vijay Diwas at Drass-Kargil sector and at Amar Jawan Jyoti, India Gate, New Delhi.

In early months of year 1999, Pakistani troops started infiltrating inside Indian boundaries towards LOC.  On May 1999 about 5000 Pakistani soldiers captured peak of a mountain located inside Indian area. They positioned themselves in key locations to give them a strategic advantage.

Action by Indian Army: Since Pakistani soldiers and terrorists were positioned at high altitudes it was not easy to combat but Indian fighter jets Mig 21, Mig-27 and Mig-29 showcased their brilliance and compelled Pakistani troops to withdraw from LOC. Pakistan asked US to intervene but then US President Bill Clinton refused the request. Indian Army fought with full strength and managed to get back all posts by July 26.

Operation Badr: Infiltration by Pakistani troops was code named Operation Badr. It had an aim of cutting down India’s link with Kargil, Dras and Ladhak area and to remove Indian army from Siachen Glacier. But Indian Army fought bravely and won this war. But victory came at a high price as official death toll on the Indian side was 527, while on the Pakistani side it was between 357 and 453. 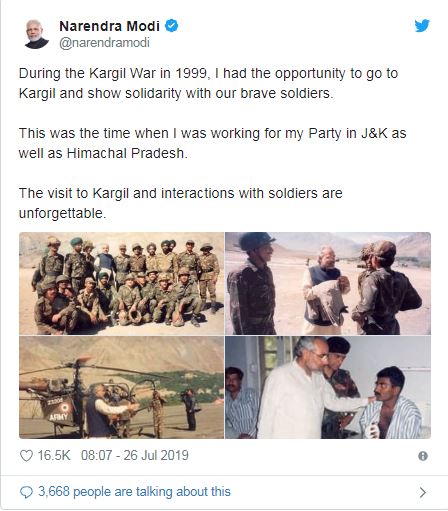 In another tweet by Prime Minister Narendra Modi, he paid his tribute to the martyrs of Indian Army. He also shared a video that shows different scenes of Kargil War and bravery of Indian Army. 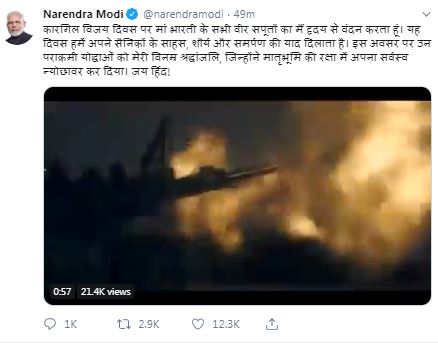