Khelo India University Games is the largest university game in India. It aims at tapping the sporting talent, who can represent the country in international events, including the Olympics. 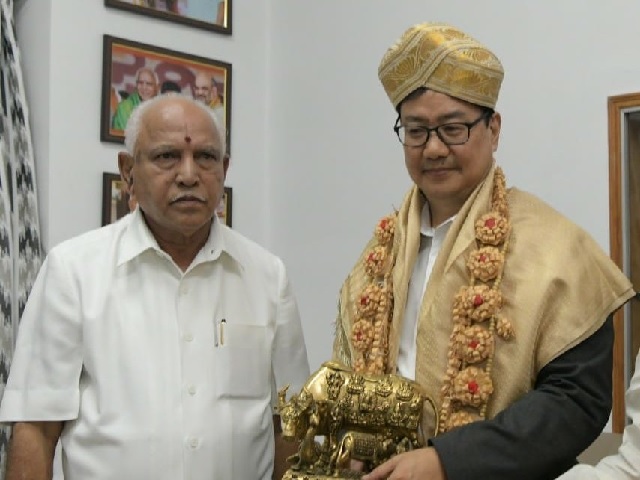 The Union Sports Minister Kiren Rijiju and Karnataka Chief Minister BS Yediyurappa announced on February 21, 2021, that the state will be hosting the second Khelo India University Games- KIUG later in 2021.

The Sports Minister further informed that PM Modi will be inaugurating the games which will be held in the city-based Jain University and other venues.

The announcement of giving the second edition of the Khelo India University Games to Karnataka and Jain University was made in the presence of the state’s Chief Minister and Youth Empowerment and Sports Minister KC Narayana Gowda.

The Union Sports Minister showed confidence that Jain University in the state will for sure organize one of the best University games in India’s history.

The first edition of the games was held in Bhubaneshwar in February 2020. It saw a total participation of 3,182 athletes in the U-25 age group, across 158 colleges and Universities from all states.

Karnataka has been chosen as the host State for the upcoming edition of the Khelo India University Games!
KIUG, which has been envisioned by @narendramodi Ji, will be conducted by the State Government in association with the Jain University in Bangalore.@BSYBJP @CMofKarnataka pic.twitter.com/fKAiBwrUjN

• KIUG is the largest university game in India. It aims at tapping the sporting talent, who can represent the country in international events, including the Olympics.

• The games will be held in partnership with the Association of Indian Universities.

• In the 2021 games, Mallakhamb and Yogasana have also been added to the roster with an aim of preserving and promoting the century-old sporting disciplines of India.

• The athlete participation, with the inclusion of these disciplines, is expected to cross 4,000 in 2021.

• Around 150 universities are expected to participate in the event and all the arrangements will be borne by the University and State Government.

• Karnataka will have many facilities, similar to the Sports Authority of India- SAI facility in Bengaluru.

• The sports meet will be held at Kanteerava Stadium and hockey matches at General Cariappa Hockey Stadium.

Need to promote sports in India:

During the announcement, he underlined that a young and large country like India which has the highest number of young people globally must be in the top rank in the Olympics in the future.

The Union Minister further pointed out that the country cannot afford to be satisfied with just one or two medals. Indians have talent and potential but unfortunately cannot focus and we lacked vision in the past.

The Sports Minister informed that Centre has started the indigenous games and has recognized 5 games, which are Gatka, Malkhamb, Thang-Ta, kallaripayattu, and Yogasana.