Maharashtra Government Formation Twist: The BJP claims support of all NCP legislators, while Sharad Pawar says that this was not in his knowledge. 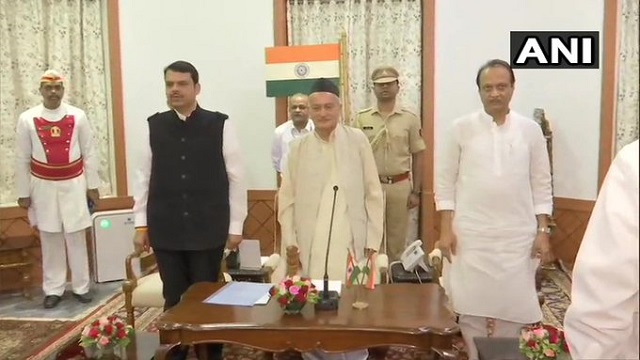 NCP’s Sharad Pawar has denied having any role in the maha coup. The NCP Chief tweeted saying that it was Ajit Pawar's personal decision to support the BJP and form the Maharashtra Government and not that of the Nationalist Congress Party (NCP). He said that he does not support or endorse this decision.

The BJP has staked claim to form the government in Maharashtra with the alleged support of the Nationalist Congress Party. NCP’s Ajit Pawar was sworn in as the deputy CM of Maharashtra, while Devendra Fadnavis retained his CM post. The oath of the office was administered by Maharashtra Governor Bhagat Singh Koshyari at Raj Bhawan. 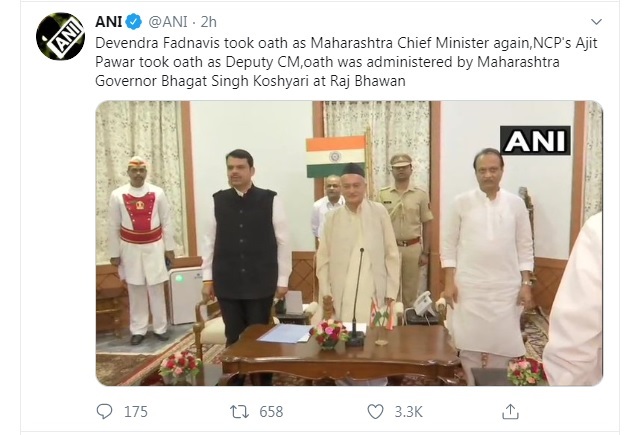 Does the BJP have the support of complete NCP?

The BJP claims support of all NCP legislators, while Sharad Pawar says that this was not in his knowledge. However, sources point out to Sharad Pawar’s recent meeting with PM Narendra Modi, which was alleged to discuss farmer issues. The PM had also praised the NCP during the opening of the Parliament’s winter session. Media reports suggest that if the entire NCP supports the BJP, it cannot be possible just with the support of Ajit Pawar.

Ajit Pawar had allegedly submitted letters of support of NCP MLAs but it is not clear how many letters of support have been submitted. According to sources, the entire NCP is supporting the BJP, sidelining Sharad Pawar. Speaking after his swearing-in ceremony, Ajit Pawar said that he took the decision to support the BJP to deal with all the immediate problems facing Maharashtra such as farmers' issues. 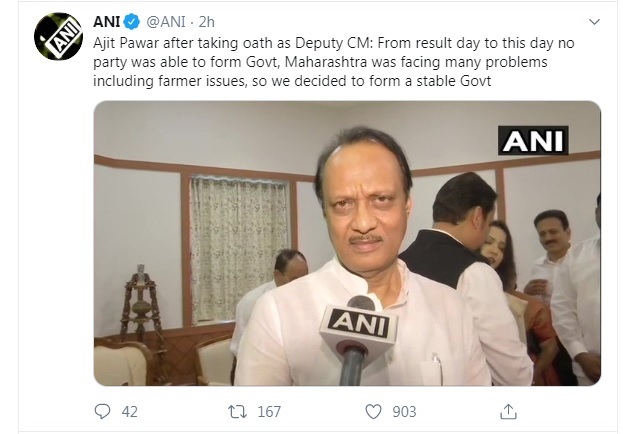 Devendra Fadnavis stated after his oath-taking ceremony said that Maharashtra needed a stable government, not a haphazard one. He also expressed his gratitude to NCP's Ajit Pawar for taking the decision to come together with the BJP.  Fadnavis also claims the support of some other leaders. 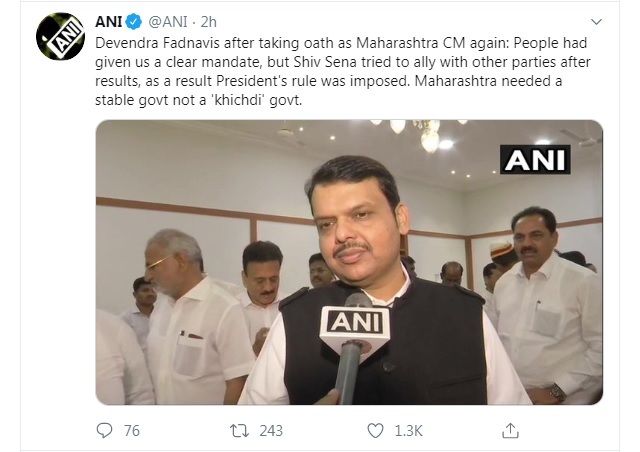 PM Modi congratulated both Devendra Fadnavis and Ajit Pawar on becoming the CM and Deputy CM of Maharashtra. The Prime Minister said that he was confident that they will work together diligently for Maharashtra's bright future.

Sharad Pawar and Uddhav Thackeray are scheduled to address the media at 12.30 pm. The Shiv Sena-NCP and Congress were in talks till yesterday night on government formation in the state. The Congress and the NCP had finally come to an agreement on all issues and agreed to back the Shiv Sena and further the talks. A source close to Congress termed the mega-development as "backstabbing" by the NCP.

The National Spokesperson of the Congress, Abhishek Singhvi tweeted saying that he thought it was fake news earlier. He said that while the tripartite negotiation could have taken longer, the fast movers grabbed the given window.

The Congress has called an urgent meeting at the party office in Mumbai. Senior Congress party leaders Mallikarjun Kharge and KC Venugopal are expected to be present at the meeting.

The move has come at a time when the Shiv Sena, NCP and the Congress had reached the final stage of discussions towards forming the government in Maharashtra. NCP Chief Sharad Pawar had even claimed support for Shiv Sena Chief Uddhav Thackeray as the new chief minister of the alliance government.

The BJP, which had emerged as the single largest party in the Maharashtra assembly election results 2019, had refused to accept the Governor's invitation to form the government in the state saying that it did not have enough numbers, as the Shiv Sena was stuck on its 50:50 claim.

The Shiv Sena had remained firm on its demand for rotating the Chief Minister's post between the alliance, which they claimed had been agreed upon before the formation of their pre-poll alliance.  With the BJP refusing to heed to the claim, the Shiv Sena decided to part ways with the party and explore other options to form the government.

However, when the Maharashtra Governor Bhagat Singh Koshyari had invited the Shiv Sena to form the government, it could not furnish the letters of support within the given time and President's Rule was imposed in the state.