The much-awaited FIFA U-17 World Cup kicks off today, with four opening day matches to be played in Delhi and Mumbai. Hosts India would be taking on team USA in the second opening match to be played at Delhi’s Jawahar Lal Nehru Stadium. 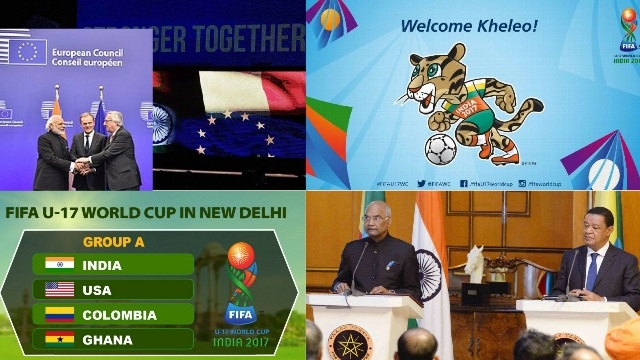 The 14th India and European Union summit is scheduled to begin in New Delhi on 6 October 2017. Both the groups are expected to discuss a host of key issues including ways to remove hurdles for the long-pending free trade agreement.

The much-awaited FIFA U-17 World Cup kicks off today, 6 October 2017 with four opening day matches to be played in Delhi and Mumbai.
While Colombia and Ghana would be the first teams to play the inaugural match at Delhi’s Jawahar Lal Nehru Stadium, hosts India would be taking on team USA in the second match.

In Mumbai, the matches would be played at DY Patil stadium in Navi Mumbai. First New Zealand would be taking on Turkey then Paraguay would be playing against Mali.

This is the first time that India will be participating in a FIFA World Cup.

India and Ethiopia on 5 October 2017 signed agreements on trade, communication and media to boost bilateral ties.

The signing of the agreements follow high-level talks between Indian President Ram Nath Kovind and his Ethiopian counterpart Mulatu Teshome. Kovind and Teshome discussed economic relations, with the agreements on trade, communication and media signed in their presence. India also thanked Ethiopia for its participation in the International Solar Alliance (ISA), established in 2015.