Prime Minister Narendra Modi was conferred with the Order of Zayed, UAE’s highest civilian award on August 24, 2019. The PM also launched the RuPay card in UAE.

The United Arab Emirates had announced its decision to honour Prime Minister Modi with its highest decoration, Zayed medal on April 4, 2019. The gulf nation decided to honour the PM with its highest civilian award to recognise his "pivotal role" in strengthening ties between the two nations.

The Crown Prince of Abu Dhabi, Mohammed Bin Zayed Al Nahyan had tweeted then saying, "We have historical and comprehensive strategic ties with India, reinforced by the pivotal role of my dear friend, Prime Minister Narendra Modi, who gave these relations a big boost. In appreciation of his efforts, the UAE President grants him the Zayed Medal.” 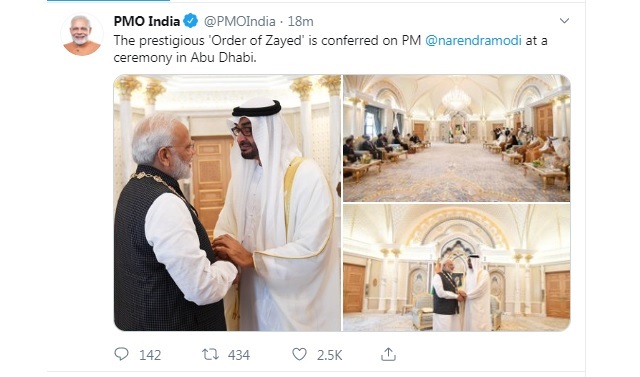 The Zayed Medal is the highest civilian decoration of the UAE, which is awarded to kings, presidents and heads of states. The medal has been previously conferred to Russian President Vladimir Putin, Chinese President Xi Jinping, and Queen of the United Kingdom Elizabeth II.

Prime Minister Narendra Modi officially launched the RuPay card in the UAE on August 24, 2019 at the Emirates Palace, Abu Dhabi. With this, UAE has become the first gulf country where the Indian RuPay card has been launched. 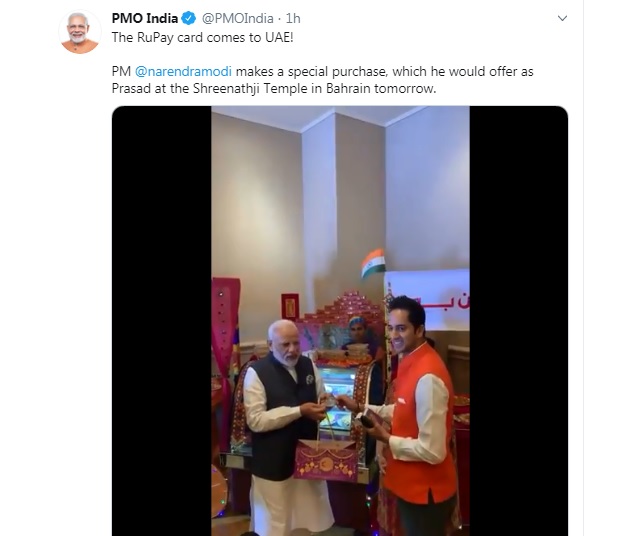 Prime Minister Narendra Modi is currently on a three-nation tour to France, UAE and Bahrain. The Prime Minister had arrived in the UAE on August 23 and will leave for Bahrain today and then return to France for the G7 summit between August 25-26.

The conferral comes at a time when Pakistan is mustering the support of Muslim-dominated nations against India over the Kashmir issue.