PM Modi invited innovative ideas and suggestions for his Independence Day speech saying that it will allow common people to be a part of the occasion and contribute towards nation building.

The Prime Minister directly invited suggestions by tweeting, “I am delighted to invite you all to share your valuable inputs for my speech on 15th August. “ PM Modi added by saying that let the thoughts and ideas be heard by 130 crore Indians from the ramparts of the Red Fort.

The inputs and suggestions can be submitted on the specially created open forum on the NaMo app. After going through all the suggestions, PM Modi may choose to include the most innovative ones in his final Independence Day speech.

The suggestions can be submitted here: http://nm-4.com/dfr8 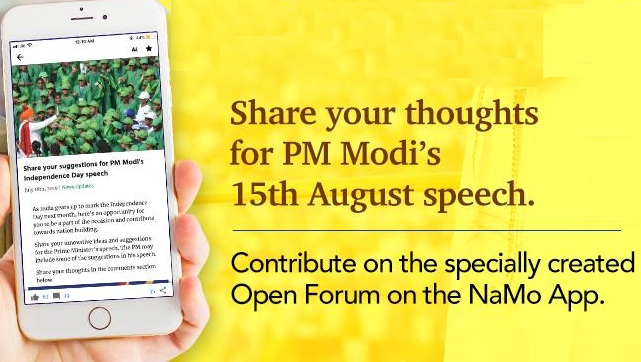 PM Modi has directly invited suggestions and ideas from the people for his Independence Day speech since the past four years.

This year’s Independence Day speech will be PM Modi’s first speech after coming back to power following a landslide victory in Lok Sabha Elections 2019.