With the launch of this engine, India now competes with Russia, China, Germany and Sweden that have successfully run 12000 horsepower and above capacity electric Locomotives. 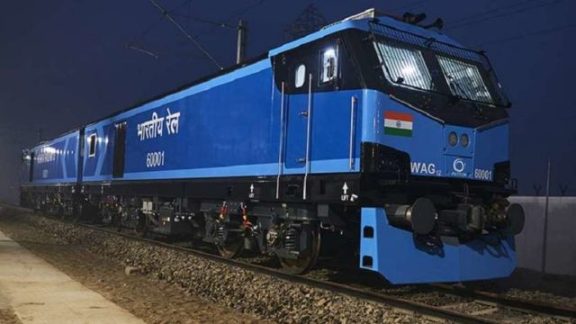 This superfast railway engine was launched during Modi's visit to Bihar to attend the centenary celebrations of the Champaran Satyagraha as a part of "Chalo Champaran Campaign".

The theme of the centenary celebrations of the Champaran Satyagraha is "Satyagraha se Swachhagrah".

• This all-electric high-speed locomotive was made with the help of French company Alstom under 'Make In India' Project at Madhepura Rail Loco factory of Bihar.

• Each double section locomotive has a transport capacity of 6000 tonnes. The heavy haulage locomotives will be used to transport coal and iron ore.

• This high-speed all-electric rail engine will reduce the congestion faced by Indian railways with a speed of 120 km/hr.

• Being all-electric, it will bring down operating costs for the Railways and will cut down greenhouse gas emissions as well.

• The engine will also have the ability to endure the tough Indian climate with the installation of IGBT based propulsion technology.

• With the launch of this engine, India now competes with Russia, China, Germany and Sweden that have successfully run 12000 horsepower and above capacity electric Locomotives.

• Alstom is expected to deliver a total of 800 high horsepower locomotives over a period of 11 years to India. The entire project will cost Rs 200 million.

• The first five locomotives will be imported while the remaining 795 will be manufactured in the country under the Make in India programme.

• On the same occasion, PM Modi laid the foundation stone of a project for doubling of Muzzafarpur-Sagauli (100.6 km) and Sagauli-Valmikinagar sections (109.7 km).

• He also flagged off the first run of the Champaran Humsafar Express between Katihar and Old Delhi.