A major study has revealed that people are most at risk of succumbing to pollution in continents of Asia and Africa with India topping the list of individual countries. The study reports that one out of every four premature deaths in India in 2015 was due to pollution. China's environment was reported to be the second deadliest, with more than 1.8 million premature deaths, attributed to pollution-related illness. 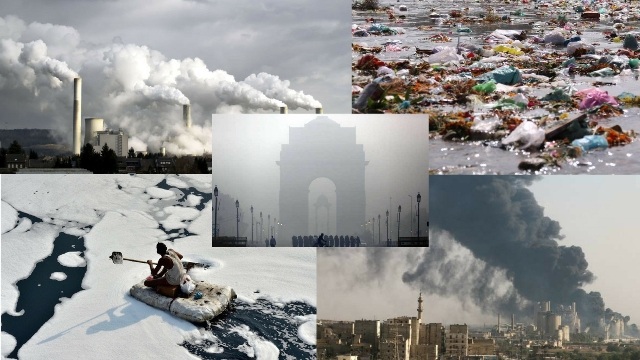 A major study released on 19 October 2017 revealed that environmental pollution is killing more people every year than all war and violence in the world.

According to the study, one out of every six premature deaths in the world in 2015 - about 9 million - could be attributed to disease from toxic exposure. The study reports that pollution both land and air claim more lives in comparison to major hazards such as natural disasters, smoking, hunger, even more than life-threatening diseases such as AIDS, tuberculosis and malaria combined.

The study was published in The Lancet medical journal.

• The report marks the first attempt to pull together data on disease and death caused by all forms of pollution combined.

• The report shows that besides taking so many lives, the impact of pollution on the economy of the world is also massive. It costs some $4.6 trillion in annual losses, about 6.2 percent of the global economy.

• According to experts, 9 million premature deaths found by the study is just a partial estimate. The number of people killed by pollution is undoubtedly higher and will be quantified once more research is done and new methods of assessing harmful impacts are developed.

The study tally reveals that the minimum estimate of 9 million pollution-related deaths is:

- Three times the number of the people killed by AIDS, tuberculosis and malaria combined

- Six times more than the number killed in road accidents,

- 15 times more than the number of people killed in war or other forms of violence.

• The region of Sub-Saharan Africa is yet to even set up air pollution monitoring systems.

• Soil pollution too has received the least amount of attention.

• There are still plenty of potential toxins still being ignored, with less than half of the 5000 new chemicals widely dispersed throughout the environment since 1950 having been tested for safety or toxic substances.

• People are most at risk in continents of Asia and Africa with India topping the list of individual countries.

• According to the study, one out of every four premature deaths in India in 2015, or some 2.5 million, was due to pollution.

• China's environment was reported to be the second deadliest, with more than 1.8 million premature deaths, or one in five, attributed to pollution-related illness.

• Several other countries such as Bangladesh, Pakistan, North Korea, South Sudan and Haiti also witness nearly one fifth of the premature deaths due to pollution.

• Among the vast majority of pollution-related deaths, 92 percent occur in low or middle-income developing countries, where policy makers are chiefly concerned with developing their economies, lifting people out of poverty and building basic infrastructure.

• In wealthier countries where overall pollution is not as unchecked, the poorest communities are more often exposed.

The main authors of the study reached the reported figures after applying methods outlined by the US Environmental Protection Agency for assessing field data from soil tests, as well as with air and water pollution data from the Global Burden of Disease, an ongoing study run by institutions including the World Health Organization and the Institute for Health Metrics and Evaluation at the University of Washington.

• The World Bank in April 2017 declared that reducing pollution, in all forms, would now be a global priority.

• In December 2017, the United Nations would be hosting its first-ever conference on the topic of pollution.

• Another major international initiative to work towards a better environment is the Paris climate accord, which was adopted by consensus on 12 December 2015.

• The agreement deals with greenhouse gas emissions mitigation, adaptation and finance starting in the year 2020.

• As of October 2017, 195 UNFCCC (United Nations Framework Convention on Climate Change) members have signed the agreement, 168 of which have ratified it.

• The United States under the Trump administration has however, announced that it would be withdrawing itself from the pact.