Rajya Sabha Elections 2020: The biennial elections for 55 Rajya Sabha seats were scheduled to be held on March 26, 2020.

Rajya Sabha Elections 2020: The Election Commission on March 24, 2020 decided to postpone the Rajya Sabha Elections, which were scheduled to be conducted on March 26.  The decision comes amidst the complete lockdown imposed by states and union territories to tackle the spread of coronavirus.

The biennial elections for 55 Rajya Sabha seats were scheduled to be held on March 26, 2020, as per an announcement by the Election Commission on February 25th. However, Delhi went under complete lockdown on March 23 followed by imposition of curfew on March 24. 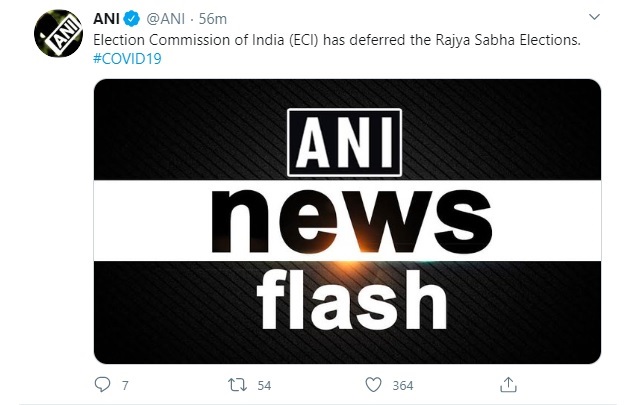 • The elections for 55 Rajya seats, almost 1/4th of house was scheduled for March 26. The last date for filing of nominations was March 13.

• Though the elections have been postponed now, 37 candidates have already been elected without any contest.

• The Election Commission will now announce a fresh schedule for the remaining 18 seats after reviewing the circumstances.

• If the elections are not held soon, the strength of the house will be reduced, as the term of the 18 MPs will end on April 2nd.

Former Chief Justice of India Ranjan Gogoi also took his oath as a member of the upper house recently after receiving nomination from the President.  The coronavirus cases have so far crossed 500 in the nation, as per Union Health Ministry.