Eminent Hindi author and poet Krishna Sobti passed away at the age of 93 in Delhi on January 25. The writer was known primarily for writing about issues of female identity and sexuality. She was offered the Padma Bhushan in 2010, which she had declined.

Eminent Hindi author and poet Krishna Sobti passed away on January 25, 2019 at a hospital in Delhi. She was 93.

The author had been admitted to a Delhi hospital for the last two months. She was about to complete her 94 years in February. Since the last one week, she was in the ICU. She is a recipient of prestigious awards such as Sahitya Akademi award, Jnanpith and was also offered Padma Bhushan, which she had declined. 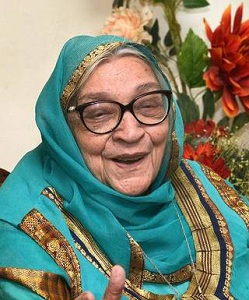 • Born in 1925 in Gujrat, Punjab (now a part of Pakistan), Krishna Sobti was a popular Hindi fiction writer and essayist.

• She was known primarily for writing about issues of female identity and sexuality. She is best known for her 1966 novel Mitro Marjani, an unapologetic portrayal of a married woman's sexuality.

• Sobti also used to write under the pen name of Hashmat and has published Hum Hashmat, a compilation of pen portraits of writers and friends.

• A number of her works are now available in English and Urdu.

• Krishna Sobti won the Sahitya Akademi Award in 1980 for her novel Zindaginama.

• In 1996, she was awarded the Sahitya Akademi Fellowship, the highest award of the Akademi.

• In 2017, she received the Jnanpith Award for her contribution to Indian literature.

• She was also the recipient of the first Katha Chudamani Award in 1999 for Lifetime Literary Achievement.

• In 2008, her novel Samay Sargam was selected for Vyas Samman, instituted by the K. K. Birla Foundation.

• In 2005, Dil-o-Danish, translated into ‘The Heart Has Its Reasons’ in English by Reema Anand and Meenakshi Swami of Katha Books, won the Crossword Award in the Indian Language Fiction Translation category.

• In 2010, Sobti was also offered the Padma Bhushan, the third-highest civilian award, which she had declined.