The Great Barrier Reef of Australia has been experiencing significant spells of coral bleaching due to warming sea temperatures linked to climate change. 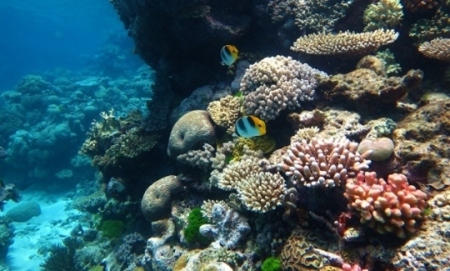 Scientists from the Australian Institute of Marine Biology have developed an ultra-fine biodegradable film, some 50000 times thinner than a human hair, to prevent coral bleaching, which had spread across the Great Barrier Reef in Australia in 2016 and 2017.

The findings were published by Great Barrier Reef Foundation (GBRF) on March 27, 2018.

• Scientists developed a film which acts as a sun shield to protect the Great Barrier Reef from environmental degradation.

• The shield has been designed to sit on the surface of the water above the corals rather than directly on the corals to provide an effective barrier against the sun.

• Scientists conducted the trials on seven different coral types and concluded that this protective layer decreased the bleaching of most species, cutting off sunlight by up to 30 percent.

• The test results of this floating sun shield, made of calcium carbonate, were remarkable enough to establish the certainty in protecting the reef from the effects of bleaching.

• However, scientists considered it unreasonable to cover the entire 348000 square-kilometre reef with the sunshield, rather, it could be deployed on a smaller level to protect high-risk areas.

• The site began to deteriorate during the 1990s as a result of the double impact of warming seawater and increased acidity.

• It has been experiencing significant spells of coral bleaching due to warming sea temperatures linked to climate change.

• The unprecedented coral bleaching in 2016 and 2017 damaged about 1,500 km of the Great Barrier Reef, which is two-third of the total.