Some Muslim groups see the issue as a matter of religious right while others, including the Centre, termed it unconstitutional. 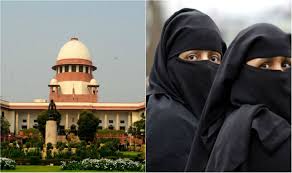 With its trial to give an end to the issue of the Triple Talaq in Muslim community, the five judges of five faith of the Supreme Court of India in its judgement on 22 August 2017 struck down the validity of triple talaq by a majority of 3:2.

The court in its verdict also said that the practice of instant triple talaq was violative of Article 14 and Article 21 of the Indian Constitution. It also goes against Shariat and the basic tenets of the Quran.

The bench said that the practice violates the fundamental right of Muslim women as it irrevocably ends the marriage without any chance of reconciliation.

Justice Rohinton Nariman and Justice Uday Lalit and Justice Kurien Joseph struck down the practice by terming it as unconstitutional. They said that the practice was against the teachings of Quran and hence it couldn't be a practice to be protected under the right to religion.

Besides, the CJI Khehar also directed the union government to bring law to govern marriage and divorce in the Muslim community. He said to come up with the law in six months.

Instant Triple Talaq Controversy: What & Why

The decision was made by the constitution bench of the highest court of India while hearing seven petitions filed by Muslim women challenging the 1400-year-old practice, including by one who was divorced on WhatsApp. The petitioners had claimed that the practice was unconstitutional.

They challenged the Constitutionality of Section 2 of the Muslim Personal Law (Shariat) Application Act, 1937 in so far as it seeks to recognise and validate Triple Talaq.

Six of the seven petitioners in the triple talaq case were Shayara Bano, Ishrat Jahan, Gulshan Parween, Aafreen Rehman, and Atiya Sabri along with the Bharatiya Muslim Mahila Andolan (BMMA).

Earlier on 18 May 2017, the verdict on the triple talaq case was reserved by the five-judge constitution bench headed by Chief Justice J S Khehar. The court reserved its verdict after a six-day marathon hearing during the summer vacation.

During its hearing during vacation, the apex court had clarified that it may not deliberate upon the issue of polygamy and said it will only examine whether triple talaq was part of an enforceable fundamental right to practice religion by the Muslims.

It was argued before the court that triple talaq was discrimination on the ground of sex and this practice was abhorrent to the tenets of holy Quran and no amount of advocacy can save this practice which is contrary to constitutional tenets.

The union government had told the bench that it will come out with a law to regulate marriage and divorce among Muslims if triple talaq is held invalid and unconstitutional by the apex court.