Swachhta hi Seva is a massive nationwide awareness and mobilization campaign on Swachhta. The Swachhta hi Seva 2019 is being organized from September 11 till October 2, 2019. PM Modi had set the goal of making India ODF by October 2, the 150th birth anniversary of Mahatma Gandhi under the Swachh Bharat Mission (SBM).

Swachhta hi Seva 2019 campaign launch was jointly organized by Animal Husbandry and Dairy and Drinking Water and Sanitation department of the central government along with the state government of Uttar Pradesh.

The campaign will also involve a nationwide shramdaan for plastic waste collection and segregation on October 2. The collected plastic waste will then be recycled and effectively disposed before Diwali, which is on October 27, 2019.

PM Modi himself had written personal letters to all Sarpanches and Swachhagrahis to motivate them to make Swachhta hi Seva 2019 a grand success. The personal letters were read out on September 11 at special Gram Sabhas.

After the launch of Swachhta hi Seva 2019, PM Modi visited the Pashudhan Arogya Vigyan Mela, where cows were being operated to remove plastic waste from their stomachs. The Prime Minister also interacted with a group of women from Uttar Pradesh who segregate plastic waste into recyclables and non-recyclables and also participated in the segregation activity himself. 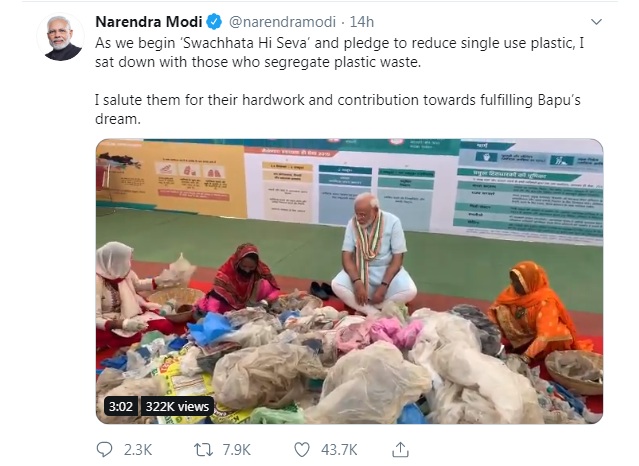 PM Modi urged all citizens to rid their house, offices and work spaces from single-use plastic. He drew people’s attention to the hazardous effects of single-use plastic on the environment and the health of animals and aquatic life. He appealed to people to use cloth or jute bags while going out shopping and use metal or earthen glasses for serving water in offices.

The Prime Minister also asked people to collect all plastic waste from their surroundings at an identified place and ensure its proper disposal with the support of the local administration.