India's Manushi Chhillar was crowned Miss World 2017 at the prestigious pageant’s 67th edition that was held in Sanya, China. The 20-year-old’s win has brought home the coveted title after a 17-year-long wait. The last Indian contestant to win Miss World was Priyanka Chopra in the year 2000. 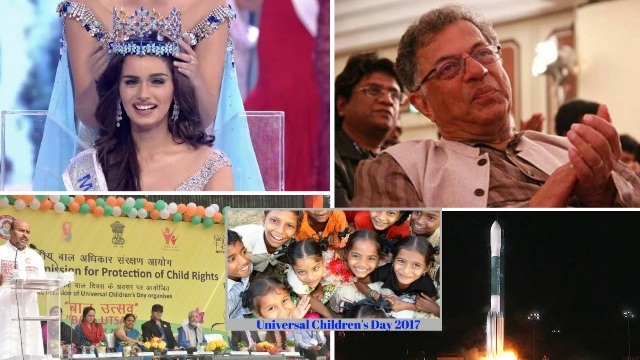 India's Manushi Chhillar was crowned Miss World 2017 at the prestigious pageant’s 67th edition that was held in Sanya, China on 18 November 2017.

Actor-playwright Girish Karnad was on 19 November 2017 conferred with Tata Literature Live! Lifetime Achievement Award 2017 for his outstanding contribution in the field of theatre.

The Universal Children's Day was observed across the world on 20 November 2017 with the theme '2017: It’s a #KidsTakeOver'.

This year, UNICEF celebrated the day by inviting children from around the world to voice their support for millions of their friends and kin who are unschooled, unprotected and uprooted. The day aims to advocate, promote and celebrate children's rights to build a better world for Children.

This is the first in a series of four such satellites in a collaborative programme between NOAA and NASA. It is expected to improve weather forecasting such as predicting a hurricane's track and will help agencies involved with post-storm recovery by visualizing storm damage and the geographic extent of power outages.

The National Commission for Protection of Child Rights (NCPCR) celebrated Baal Utsav on 18 November 2017 as a part of Hausla-2017, a week-long festival organised by Women and Child Development Ministry for children living in Child Care Institutions (CCIs) across the country.