Indian words like 'Dadagiri', 'Surya Namaskar', 'Achcha' and 'Bapu' were added to the Oxford English Dictionary in the month of September 2017. These words are among 70 Indian words from various regional languages like Telugu, Tamil, Hindi, Bengali and Gujarati that were added to the dictionary. 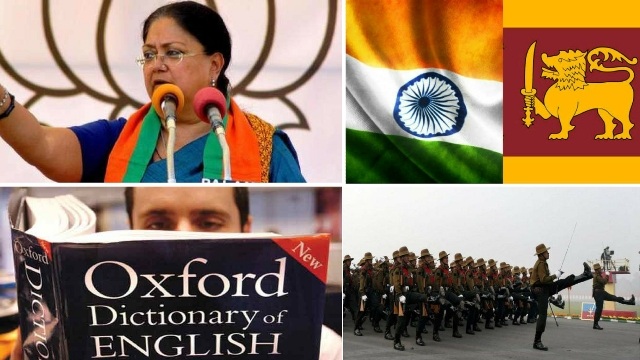 The state government of Rajasthan on 26 October 2017 passed a bill that increased the reservation quota for Other Backward Classes (OBC) from 21 per cent to 26 per cent.

The Backward Classes (Reservation of Seats in Educational Institutions in the State and of Appointments and Posts in Services under the State) Bill will provide reservation to the five ‘most backward’ OBC communities.

Indian words like 'Dadagiri', 'Surya Namaskar', 'Achcha' and 'Bapu' were added to the Oxford English Dictionary in the month of September 2017. These words are among 70 Indian words from various regional languages like Telugu, Tamil, Hindi, Bengali and Gujarati that were added to the dictionary.

India on 26 October 2017 signed a Memorandum of Understanding (MoU) with Sri Lanka to build 1200 houses in Hambantota, a southern port city of Sri Lanka.

These projects are in continuation of India's commitment to assist Sri Lanka in the development of housing infrastructure. India has already committed 50000 houses in the North and East Sri Lanka, out of which nearly 46000 houses have been completed.

Indian Railways’ first set of solar plants having a total capacity of 5 megawatt peak (MWp) would be launched in New Delhi on 27 October 2017.

The plants built on the roof tops of Hazrat Nizamuddin, New Delhi, Anand Vihar and Delhi railway stations would be generating 76.5 lakh units of solar power cumulatively every year. The project will help the railways save around Rs 421.4 lakh annually and reduce 6082 tonnes of CO2 emissions.

This project is a part of the Union government’s National Solar Mission in which Indian Railways plans to commission around 1000 MWp solar plants across its wide rail network.

Infantry Day was observed across India on 27 October 2017 to commemorate the sacrifices made by the infantry who fought against Pakistan in Jammu and Kashmir in 1947.

In 1947, Jammu and Kashmir was invaded by tribals who were getting support from Pakistani Army. The then Prime Minister Jawahar Lal Nehru ordered the Indian Army for quick action against the invaders.

Following the order, the 1st Battalion of the SIKH Regiment was sent to Kashmir Srinagar to liberate Kashmir from the invaders. This was the first infantry action by the Indian Army after independence.