The fossil was found inside rocks from the Mesozoic Era, which ran between 252 and 66 million years ago. The researchers believe that the specimen belongs to Ophthalmosauridae family of ichthyosaurs that lived in oceans between 165 and 90 million years ago. 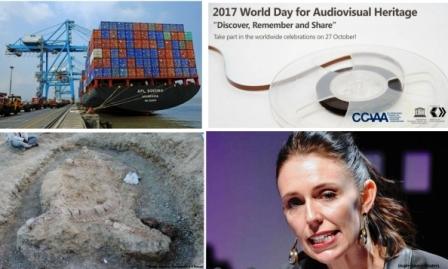 The fossil was found inside rocks from the Mesozoic Era, which ran between 252 and 66 million years ago. The researchers believe that the specimen belongs to Ophthalmosauridae family of ichthyosaurs that lived in oceans between 165 and 90 million years ago.

The findings were published in the Plos One science journal.

The Ministry of Shipping sanctioned Rs 25 crore to the Jawaharlal Nehru Port Trust (JNPT) for development of coastal berth and another Rs 50 crore to the Karwar port in Karnataka on 27 October 2017. The grant was offered under the Sagarmala project.

The objective behind the Coastal Berth Scheme (under Sagarmala project) is to develop infrastructure by providing financial assistance to ports or states. The purpose is to foster movement of cargo and passengers either by sea or national waterways.

The expansion at both the ports will witness an increased shipping activity, employment generation and overall improvement in the socio-economic condition in the area.

Jacinda Ardern was sworn in as the New Prime Minister of New Zealand on 26 October 2017. With this, 37 year old Jacinda became the youngest New Zealand female leader in 150 years.

National party leader Bill English had to accept defeat despite a winning 44.4 per cent of the vote, higher than Labour’s 36 per cent. It won 56 seats out of 120 in the parliament and is seen as the strongest opposition in New Zealand.

This was the first time since New Zealand adopted proportional voting since 1996.

World Day for Audiovisual Heritage was observed across the world on 27 October 2017 with the theme 'Discover, remember and share'.

On this day, the United Nations Educational, Scientific and Cultural Organization (UNESCO) encourages audiovisual archives around the globe to celebrate 27 October by showcasing their precious collections to promote the value of audiovisual heritage.

As per UNESCO, audiovisual documents like films, radio and television programmes are common heritage and contain the primary records of the history of the 20th and 21st centuries. In order to safeguard this audiovisual heritage, the World Day for Audiovisual Heritage is observed every year.

Delhi Olympic Games to be held in December 2017

The Delhi State Olympic Association announced on 26 October 2017 to organise Delhi Olympic Games in the capital city. The sporting events will be held from 9 December 2017- 18 December 2017.

The nine-day sporting events will be held in 25 different stadiums in various parts of Delhi including Talkatora Stadium, Indira Gandhi Stadium, National Stadium, Thyagaraj Sports Complex, Siri Fort, among others.

The games will include hockey, boxing, wrestling, weightlifting, swimming, karate, wushu and 28 other disciplines.