NASAMS-II is an upgraded version of the NASAMS developed by Raytheon in partnership with KONGSBERG Defence and Aerospace of Norway. 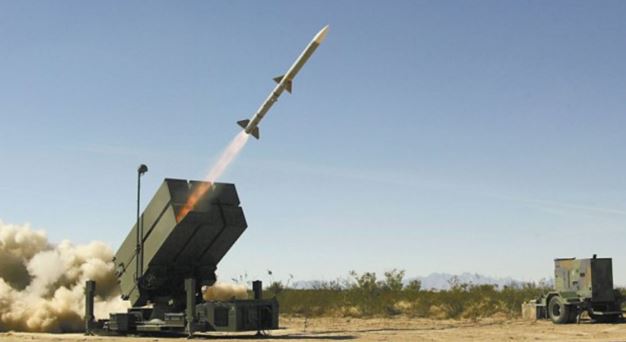 The United States has approved the sale of armed drones to India also offered integrated air and missile defence systems. Its objective is to improve India’s military capabilities and to protect Indo-Pacific region.

US administration is likely to send the final draft of the ‘letter of acceptance’ for the sale of NASAMS-II to India under its foreign military sales programme, at a cost of over Rs 6,000 crore (about US dollar 1 billion), by July-August.

•    NASAMS-II (National Advanced Surface to Air Missile System - NASAMS) is an upgraded version of the NASAMS developed by Raytheon in partnership with KONGSBERG Defence and Aerospace of Norway.
•    It has been operational since 2007.  It features new 3D mobile surveillance radars and 12 missile launchers for quicker reaction.
•    NASAMS-II is highly adaptable mid-range solution for any operational air defence requirement.
•    It provides tailor-able, state-of-the-art defence system that can maximise the ability to quickly identify, engage and destroy current and evolving enemy aircraft, UAV or emerging cruise missile threats.
•    NASAMS-II is armed with 3D Sentinel radars, short and medium-range missiles, launchers, fire-distribution centres and command and control units to quickly detect, track and shoot down multiple airborne threats.
•    It is part of the air defence network guarding US capital city Washington DC. It is also deployed in several NATO countries.

In year 2017, the United States had agreed to sell surveillance version of the Guardian drones to India following a meeting between Prime Minister Narendra Modi and President Donald Trump. With this offer, India has become the first non-treaty partner to be offered an MTCR Category-1 Unmanned Aerial System - the Sea Guardian UAS manufactured by General Atomics.

India signed the S-400 deal with Russia in October 2018 after four years of extensive negotiations and an inter-governmental agreement despite the threat of sanctions under the US law called CAATSA (Countering America’s Adversaries through Sanctions Act).

India’s deal of NASAMS-II will help country to protect air route also to prevent 9/11-kind of attacks. It will also complement India’s other systems such as the medium and long-range surface-to-air missile (SAM) systems under procurement. With this, India will join League of Nations including US, Russia and Israel etc. who have their own missile defence systems to protect their national capital regions