Indian Vice President M Venkaiah Naidu presented the second Chhatra Vishwakarma Awards to students and their mentors and Sansad Adarsh Gram Yojana awards to institutions for their contribution in the holistic development of villages adopted by them. 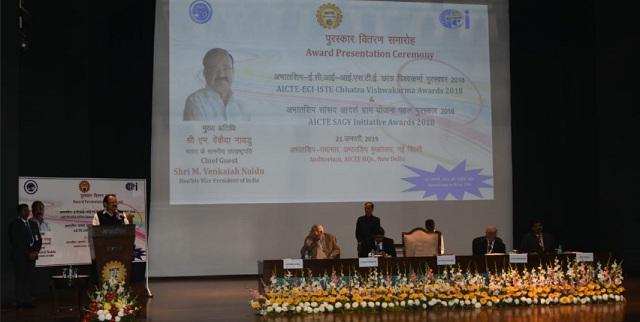 Indian Vice President M Venkaiah Naidu presented the second Chhatra Vishwakarma Awards to students and their mentors and Sansad Adarsh Gram Yojana (SAGY) awards to institutions at an event organised by the All India Council for Technical Education (AICTE) on January 21, 2019 at New Delhi.

The awards challenge young students to come up with novel ideas that have a great potential to impact life in villages through technological interventions at the grass root level. Expressing his agreement with Mahatma Gandhi’s statement that ‘the future of India lies in its villages’, the Vice President said that the development of villages is an essential precondition to the development of the nation.

Naidu also stated that educational institutions must re-orient their curriculum to ensure that students spend time in rural areas, interacting with people and understanding their problems. He said that 'one size fits all' approach will not ensure development in a vast and diverse country like India, as every village has its own individuality, its own industries and its own developmental needs.

The Chhatra Vishwakarma Awards are inspired by the spirit of engineering and creation patronised by Lord Vishwakarma, the ruling deity of construction practices in India.

The awards aim to motivate young individuals, inspire leaders and institutions and organisations to recognise and applaud the innovations and achievements of individuals as well as institutions.

This year, the AICTE in association with Engineering Council of India (ECI) and the Indian Society for Technical Education (ISTE) announced the 2nd Chhatra Vishwakarma Awards 2018 under the theme “Empowerment of Villages through Technologies”.

The AICTE invited applications from various institutions under the following categories:

(viii) Any other Rural Appropriate Technologies

The council received a total of 1067 applications from the teams of various institutions. After scrutiny, 118 teams with a total of 310 students including 191 male and 119 female students have been called for the National Convention at AICTE Headquarters, New Delhi.

The projects presented by the team, were assessed by eminent jury of domain experts and following teams and institutions were awarded the first position in the following categories:

The awards were launched in October 2014 with the aim to translate the comprehensive vision of Mahatma Gandhi of an ideal Indian village.

Under the scheme, the members of the Parliament adopted Gram Panchayats for their holistic progress.

The AICTE also encouraged institutes located in the proximity of villages to support them under the scheme. These institutes have been working hard to develop the adopted villages.

The SAGY award was constituted with an aim to motivate, recognise and honor such institutions under the theme “developed village-developed nation” to raise their performance in the specific domains leading to significant contribution for the growth and development of villages and country as well.

Under the award, 103 nominations were received from AICTE approved institutions across the country. The entries were scrutinised at different stages and judged by a jury of eminent experts in the field. Out of the 24 shortlisted applications, the following institutions were recommended for the Awards: