The Union Minister for Women and Child Development, Maneka Gandhi announced on October 12, 2018 that her ministry will be setting up a four-member committee to examine all the #MeToo cases.

The WCD Minister stated through a tweet that she believes in the pain and trauma behind every single complaint and reiterated that cases of sexual harassment at work must be dealt with a policy of zero tolerance. 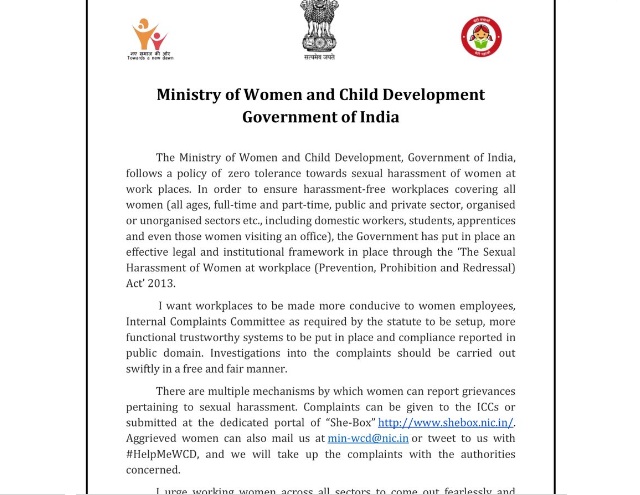 The four-member committee will comprise senior judicial and legal persons.

It will be tasked with the responsibility of examining all the recent cases that have come up in the past few days under the #MeToo campaign.

The committee will look into the legal and institutional framework that is in place for handling complaints of sexual harassment, including some of the complaints if required and advise the ministry on how to strengthen these.

The #MeToo campaign first began as a hashtag on Twitter in 2017, when Hollywood producer Harvey Weinstein was accused of sexual harassment by over 70 women.

Following her, many women came out with their horrific experiences of sexual exploitation at their workplaces and elsewhere through their social media accounts.

The movement has thrown out the names of many prominent people who have been accused of sexual harassment; some of them are very well known film and media personalities.