Indian business tycoon and philanthropist Azim Premji was bestowed with the highest French civilian distinction, Knight of the Legion of Honour in Bengaluru on November 28, 2018. He received the award for his outstanding contribution to developing the information technology industry in India, his economic outreach in France and his laudable contribution to the society as a philanthropist.

Indian business tycoon and philanthropist Azim Premji was bestowed with the highest French civilian distinction Chevalier de la Legion d'Honneur (Knight of the Legion of Honour) in Bengaluru on November 28, 2018.

Premji, who is the chairman of Wipro, received the honour from Alexandre Ziegler, the Ambassador of France to India. He received the award for his outstanding contribution to developing the information technology industry in India, his economic outreach in France and his laudable contribution to the society as a philanthropist through the Azim Premji Foundation and Azim Premji University.

• The Legion d'Honneur (Legion of Honour) award, which was instituted in 1802 by Napoleon Bonaparte, is the highest civilian award given by the French Republic for outstanding service to France, regardless of the nationality of the recipients.

• The President of the French Republic is the Grand Master of the Order of the Legion of Honour.

• Wipro said its association with France spans over 15 years and the company enjoys a close relationship with several French organisations.

• France is a key market for Wipro and the company is committed to continued investments in the nation. Nearly, 65 per cent of Wipro's employees in France are locals.

• Premji is an Indian business tycoon, investor and philanthropist, who is the chairman of Wipro Limited.

• He is informally known as the Czar of the Indian IT Industry. He was responsible for guiding Wipro through four decades of diversification and growth to finally emerge as one of the global leaders in the software industry.

• Premji owns 73 per cent stake of Wipro and also owns a private equity fund, Premji Invest, which manages his $2 billion worth of personal portfolio. 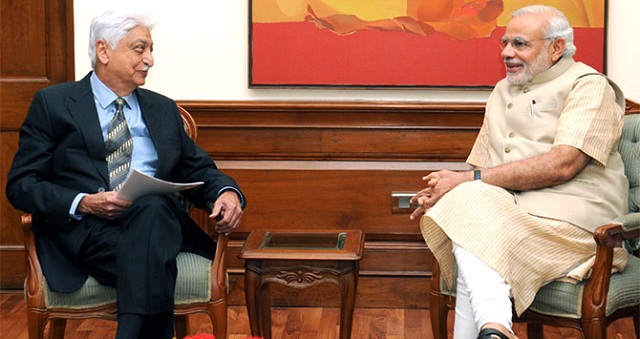 • He is currently the second richest person in India with an estimated net worth of US$15.6 billion as of October 2018.

• In 2013, he agreed to give away at least half of his wealth by signing The Giving Pledge. He started with a $2.2 billion donation to the Azim Premji Foundation, which focuses on education in India.

• The Azim Premji Foundation is a non-profit organisation founded by Premji in 2001 to significantly contribute to achieving quality universal education that facilitates a just, equitable, humane and sustainable society. The foundation has worked largely in rural areas, to help contribute to the improvement of quality and equity of school education.

• In 2005, the Indian government honoured Premji with the Padma Bhushan for his outstanding work in trade and commerce and he was awarded the Padma Vibhushan, the second highest civilian award by the Government of India in 2011. He also received an honorary doctorate from the University of Mysore in 2015.