World leaders gathered in Paris on November 11, 2018 to lead the global commemorations to mark 100 years since the end of the first World War. The occasion saw around 70 leaders come together including US President Donald Trump and Russian President Vladimir Putin to mark the centenary of the 1918 Armistice in the French capital.

World leaders gathered in Paris on November 11, 2018 to lead the global commemorations to mark 100 years since the end of the first World War.

The occasion saw around 70 leaders come together including US President Donald Trump and Russian President Vladimir Putin to mark the centenary of the 1918 Armistice in the French capital.

Germany's Angela Merkel gave the opening address alongside UN Secretary General Antonio Guterres at a conference called the Paris Peace Forum, which took place after the memorial service on the Champs-Elysees.

• The Paris Peace Forum is a new annual event based on a idea that international cooperation is key to tackling global challenges and ensuring durable peace.

• The forum is a part of the "fightback" against nationalism worldwide.

• The main aim of the conference is to show that there are lots of forces in the international system including states, NGOs, foundations, intellectuals, companies, who believe that there is a need of a world of rules, an open world and a multilateral world.

• The first World War saw almost 70 of the modern day nations in conflict with each other with six main colonial powers in the centre including Austria-Hungary, Britain, France, Germany, Russia and the Ottoman Empire.

While Queen Elizabeth II and the royal family attended a wreath-laying ceremony at the Cenotaph in central London, UK Prime Minister Theresa May and German President Frank-Walter Steinmeier attended a national service of remembrance at Westminster Abbey.

The UK government invited 10,000 members of the public to march past the Cenotaph in a "People's Procession" to pay their respects to all who served in World War I.

The Government also called for bells to be rung across the nation and around the world to replicate the spontaneous ringing of bells across Britain on November 11, 1918 as news of the war's end spread. 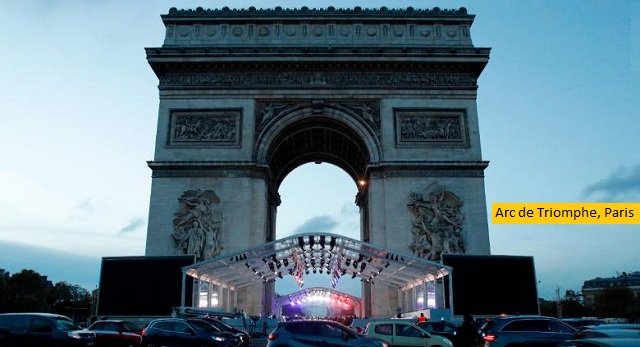 US President Donald Trump, whose hardline nationalism has badly shaken the Western alliance, arrived in Paris on November 9 criticising host Macron for being "insulting."

Trump took offense at a recent interview in which Macron talked about the need for a European army and listed the US along with Russia and China as a threat to national security.

With far-right nationalist politicians coming to power from Brazil to Italy to Austria, 40-year-old centrist Macron is set to invoke the war to make the case for international cooperation.

On the 100th anniversary of the end of WWI, Indian Prime Minister Narendra Modi reiterated India's commitment towards world peace and pledged to work to further an atmosphere of harmony and brotherhood so that the trail of death and destruction caused by wars does not occur.

In his message, Modi remembered the brave soldiers who fought in the first World War. He said, it was a war in which India was not directly involved yet its soldiers fought world over, just for the cause of peace.

The Prime Minister said, he has had the honour of paying tributes at the Neuve-Chapelle Memorial in France and at the memorial in Israel's Haifa, places associated with India's role in the First World War.

He recalled paying tributes at the Teen Murti-Haifa Chowk in Delhi with Israeli Prime Minister Benjamin Netanyahu during Mr Netanyahu's visit to India.