75th Independence Day 2021: In the struggle for India’s Independence from the colonial rule or British Raj, the contribution of women can't be neglected. They faced various tortures, exploitations, etc. to earn freedom for us. Let us have a look at 10 forgotten women freedom fighters of India.

75th Independence Day 2021: These women spunk and determination in the face of adversity, their courage to look death in the eye, their intense love and love for their motherland; all serve the same purpose - to flare up our minds and strive for a better world but these women leaders have been long gone and forgotten. They gave selfless sacrifices and even laid their lives to see their nation free and prospering.

As India entered its 75th Independence Day, let us have a look at some unknown brave women who inspired and helped in shaping Independent India.

Matangini Hazra was known as Gandhi Buri. She participated in the Quit India Movement and Non-Cooperation Movement. During one procession, she continued to lead with the Indian flag even after being shot thrice. She kept shouting "Vande Mataram”. The first statue of a woman was put up in Kolkata, in Independent India and that was Hazra’s in 1977. The statue stands at the spot where she was killed in Tamluk. Even Hazra Road in Kolkata is also named after her. 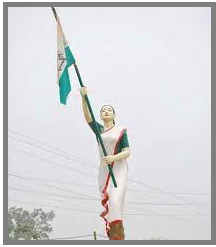 Kanaklata Barua is also known as Birbala. She was an Indian freedom fighter from Assam. She took a leading part in the Quit India Movement in 1942 at Barangabari and stood at the head of the women volunteers’ line with the National Flag in her hand. She aimed to hoist the flag at the British-dominated Gohpur Police Station by shouting the slogans “British imperialists should go back” etc. but was prohibited by the Britishers. Though she tried convincing that her intentions were noble, British police shot her with several other picketers and at the age of 18, she sacrificed her life for the country. She is popularly known as ‘The Grand Old Lady’ of the Independence Movement. She was an Indian Independence activist and a freedom fighter who is best known for hoisting the Indian National Congress flag at the Gowalia Tank Maidan in Bombay during the Quit India Movement. She also took part in the Salt Satyagraha movement as well as other protest marches and was imprisoned. She organised political prisoners and protest against the ill-treatment given in the prisons by launching a hunger strike. An eminent personality of the Indian Nationalist Movement, she was born as Bhikaiji Rustom Cama on 24th September, 1861 to a Parsi family in Bombay (now Mumbai). Well, we are talking about none other than Madam Cama, who is a well-known freedom fighter. She came from a good family and her father Sorabji Framji Patel was a powerful member of the Parsi community. She emphasised equality between men and women. She gave away all her assets to help out an orphanage for young girls. As an Indian ambassador, she also travelled to Germany in 1907 to hoist the Indian National flag. Tara Rani was born in a simple family in Saran, Bihar and got married to Phulendu Babu. They joined the Quit India Movement of Gandhi Ji in 1942, regulated protests and planned to raise the Indian flag on the roof of the Siwan Police Station. They managed to gather a crowd and began their march towards the Siwan Police Station, shouting ‘Inquilab’. When they were marching towards them, the police opened fire. Phulendu was hit and fell to the ground. Undeterred, Tara bandaged him with the help of her sari and continued to lead the crowd towards the station shouting ‘Inquilab’ while holding the Indian flag. Her husband died, when Tara came back but she continued to support the freedom struggle.

Independence Day 2020: 18 Laws and Rights must be known to every Indian Nobody knows her by her name but she played an important role in the freedom struggle as the mother of Ram Prasad Bismil. Ram Prasad was a revolutionary involved in the famous Mainpuri Conspiracy case of 1918 and the Kakori Conspiracy of 1925. In Gorakhpur Jail on 19 Dec 1927, he was arrested and hanged.

Moolmati was a simple woman, supported and helped her son in his struggle for freedom. Also, she went to Gorakhpur jail to see her son before his hanging. Ram Prasad broke down on seeing his mother who remained unmoved. She was firm in her response and told him that she was proud to have a son like him. After his death in a speech at a public gathering, she raised her other son’s hand and offered him to the Independence movement. Without her unstinting support and belief in the freedom struggle, Ram Prasad Bismil might not have had the resolve to pursue the path he had chosen. Lakshmi Sahgal was a former Indian Army officer called Captain Lakshmi. She picked up a Gun for Indian National Army (INA) founded by Netaji Subhash Chandra Bose and led it like a tigress in the struggle for Freedom. She was in charge of establishing and leading the Rani of Jhansi Regiment, comprising women soldiers. Also before joining INA, she had served a sentence in a Burma prison for her role in World War II. With a social reformer, she was a distinguished theatre actor and played a very important role in India’s fight for Independence. She became the first woman from India to be arrested by the British government for her active role as a patriotic leader. She was a remarkable person, who was endearingly referred to as a social reformer, fearless and committed freedom fighter. She also improved the socio-economic conditions of women in India, revived and promoted handicrafts and theatre. She also participated in Gandhi Ji salt Satyagraha of 1930. For Legislative Assembly she was the first woman candidate. She was instrumental in establishing the All India Women’s Conference.

She was the queen of the princely state Kittur in Karnataka but yet to gain recognition across the country for her efforts during the Independence struggle. Against the British policy of “Doctrine of Lapse”, she bravely led an Army rebellion at the age of 33 in 1824. The resistance ended in her giving up her life for the nation. Her valour proves to be an inspiration to women even today.

Sucheta Kriplani was a Gandhian, Indian freedom fighter and politician. Joined Indian National Congress and became the first woman Chief Minister of an Indian State (UP) and also founded the All India Mahila Congress in 1940. On 15th August 1947, she sang Vande Mataram in the Constituent Assembly.

So, these are the forgotten women freedom fighters who are an inspiration to us.