All about the Missing Supermassive Black hole

Scientists have recently reported a missing supermassive black hole in the Abelle cluster of galaxies called A2261-BCG. This may the first evidence of a recoiling black hole. Know all about it here

Something unusual has been spotted by the researchers in the galaxy cluster of A2261-BCG. A missing supermassive black hole has been reported. Scientists think that this is the first-ever example of recoiling black hole.

A2261-BCG is located at about 2.6 billion light-years from our planet and was studied by Dr Gultekin. This supermassive black hole, estimated to weigh up to 100 billion times the mass of the Sun, is missing. Scientists have been looking for the black hole using the Chandra X-Ray Observatory and Hubble Space Telescope.

The Hubble Telescope revealed that it has a large and flat stellar core. Chanda X-ray confirmed that there are no X-ray emissions from the centre of the galaxy. Not even in any of the four off-centre stellar knots.

“Despite searching with NASA's Chandra X-ray Observatory and Hubble Space Telescope, astronomers have no evidence that a distant black hole estimated to weigh between 3 billion and 100 billion times the mass of the Sun is anywhere to be found”, NASA’s blog read.

What is a black hole?

As explained by NASA, a black hole is a location in space where gravity pull is so high that it does not even let out the light from it. The gravity is exceptionally strong because the matter in it gets squeezed into a tiny space. Black holes are generally detected when a bog star is in the dying condition. Although not all stars get converted into black holes.

People can't see black holes as they are invisible. This is because light does not reflect off of them.

The size of a black hole can vary from the size of an atom or the mass of a mountain. Stellar black holes may have mass upto 20 times the sun's mass. 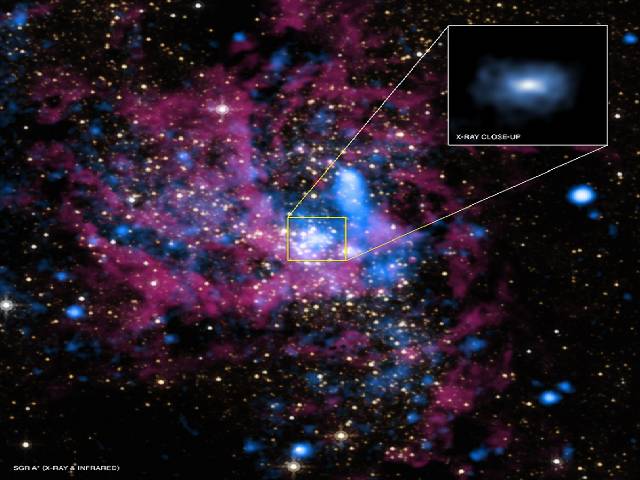 How are Black holes made?

Stellar black holes are formed whenever the centre of a huge star falls in upon self and collapses. This process causes a supernova.  Supernova is an exploding star that blasts into space.

Others believe that black holes were formed at the same time when the Universe was formed. The black holes in the centre of the galaxies are aged the same as them.

Could the Earth be destroyed by a Black Hole?

Scientists believe that the Sun is not a big enough star to turn into a black hole. Even if it did, the Earth would not fall prey to it as the black hole would have the same mass as the sun and the earth and other planets would be revolving around it as they revolve around the sun.

However complete evidence is still not found to support the statement and the process of recoiling black hole as suspected by the scientists. LIGO is still to discover the merging of Supermassive black hole.

Know all about the latest Science and Tech events here.

Does time exist in a black hole?

The slowing of time is extreme in a black hole. Considering the point of view of an observer outside the black hole, time stops.

Will a black hole kill the earth?

Why are black holes important?

These are said to create a balance in the universe.

What is a black hole made of?

A black hole can form when two neutron stars can collide, creating an event horizon, and a dense collection of matter, either in the form of gas or a star, can directly collapse, leading to a black hole.
Comment ()