As we know that India has successfully tested its first Anti-Satellite missile (ASAT) on 27 March, 2019 and became the fourth nation to achieve this after US, Russia and China. 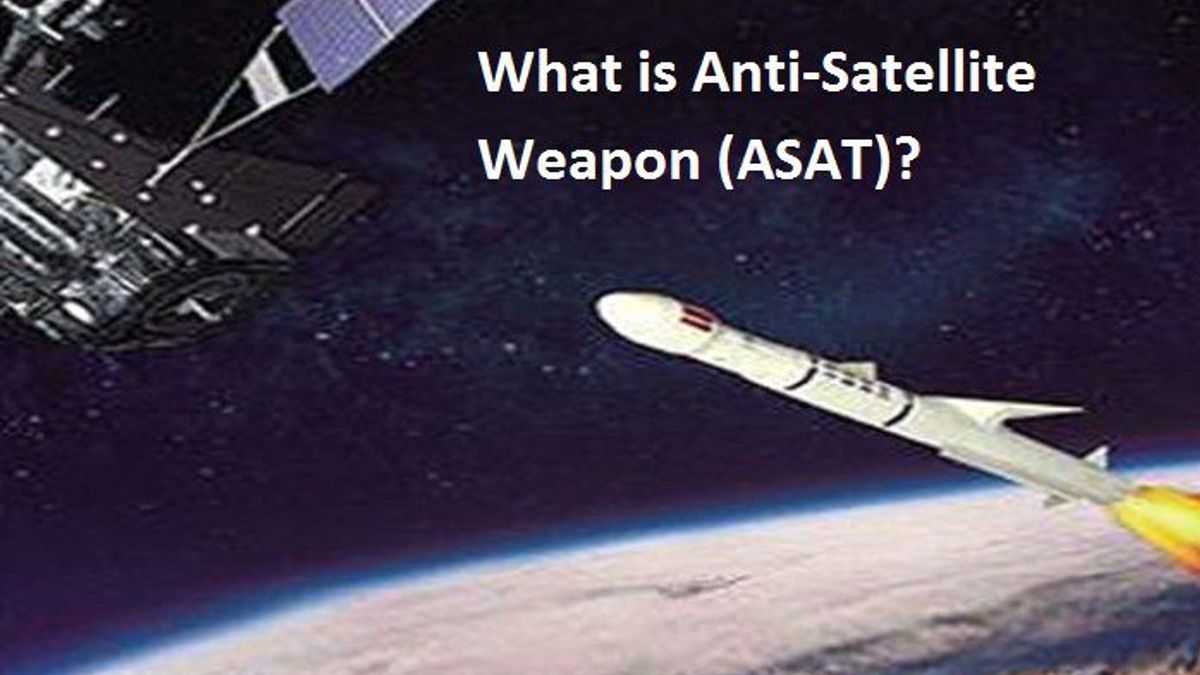 Basically, India targeted a live satellite successfully on a low earth orbit. According to PM Narendra Modi "A-SAT missile will give new strength to India's space program" and is purely India's defence initiative for its security. Further he stated that 'Mission Shakti' is an important step towards securing India's safety, economic growth and technological advancement. Do you know what is Anti-Satellite weapon, its history and timeline etc. Let us study through this article.

Anti-satellite weapons are the space weapons that are designed to destroy satellites for military purposes. India tested this missile to target live satellite on low earth orbit (LEO). Most of the military satellites orbit up to 2,000 km above the earth's surface on LEO.

But what are Space Weapons?

They are weapons used in the space warfare. Weapons that are included in this are used to attack space systems in orbit that is anti-satellite weapons. They also attack targets from space to the earth or disable missiles travelling through space. Let us tell you that such types of missiles were developed by the contesting superpowers during the Cold War.

When USSR demonstrated its ability to attack satellites in space, the U.S Air Force began developing the air-launched anti-satellite missile (ASAT) to destroy enemy satellites. More importantly, at the top of this two-stage missile there was a Miniature Homing Vehicle (MHV). Once it separated from the missile, the MHV homed in and destroyed a satellite by direct collision, rather than by detonation of a warhead - a concept known as "hit-to-kill."

Nuclear-Tipped Interceptors and the Outer Space Treaty: 1950s to 1960s
- ASAT capabilities were earlier developed by the United States and Soviet Union as a dedicated systems and residual capabilities of systems developed for other purposes, notably defence against ballistic missiles.
- Due to the limitations of the interceptor guidance systems, U.S and Soviet missile interceptors were tipped with megaton-class nuclear weapons and would permit a successful ASAT or Anti-Ballistic-Missile (ABM) attack without precision guidance. And such interceptors were recognised as poor ASAT option.
- The United States and Soviet Union signed the Outer Space Treaty (OST) in 1967 which bans orbiting nuclear weapons and provides that all countries are free to use space for peaceful purposes.

Co-Orbital ASAT Weapons: 1960s to 1970s
- A co-orbital strategy was only used by Russia which was dedicated ASAT system. In this a weapon armed with conventional explosives is launched into the same orbit as the target satellite and moves near enough to destroy it.
- The 1,400-kilogram Russian Co-Orbital ASAT weapon was designed to approach a satellite within one or two orbits. Finally, the Soviet Union declared the system operational in 1973.

U.S.-Soviet Treaty: 1972
- The treaty on the limitation of Anti-Ballistic Missile Systems prohibited interfering with "national technical means of verification" of treaty compliance, which implicitly protected reconnaissance satellites.
- In 1976, the Soviet Union resumed testing of its Co-Orbital ASAT system. Testing continued until 1982 and the system remained operational until 1993.

Air-Launched ASAT Systems: 1980s
- The United State test the Air-Launched Miniature Vehicle (ALMV) in 1982 which is a two-staged missile launched from an F-15 aircraft flying at high altitude. This missile will target satellite in low earth orbit and destroy or disrupt it in a high-speed collision, a technique known as a "kinetic kill" or "hit-to-kill" strategy. Several tests were conducted and finally in December 1985, Congress there banned further testing of the system of satellites and The Air Force discontinued the ALMV program in 1987.
- In 1983, the Strategic Defense System (SDI) was expected to develop several types of space-based interceptors with intrinsic ASAT capabilities.

The U.S. and Soviet Laser ASAT System: 1980s to 1990s
- The Ground-based ASAT weapons based on directed electromagnetic energy like lasers which offer the potential to attack satellites with different levels of intensity and low powered lasers can temporarily or permanently damage parts of a satellite's sensor where as high-powered lasers can disable, damage or destroy a satellite.
- During this period, the U.S. Army accelerated plans for its own ground-based ASAT system, known as the kinetic-energy ASAT (KE-ASAT).

Satellite Jamming: 2000
- Satellite jamming, interfering with radio communications between a satellite and users on the ground is another potential ASAT technology.
- In 2002, the United States deployed the ground-based Counter Communications System.
- In 2007, China used a mobile, ground-based missile to launch a homing vehicle that destroyed one of its aging weather satellites by direct impact, or "kinetic kill"
- In 2008, the U.S. demonstrated the ASAT capabilities of its sea-based Aegis missile defense interceptors by destroying a non-responsive U.S. satellite at an altitude of 240 km.
- In 2010, India announced its intentions to develop a hit-to-kill ASAT system and finally in 2019 India has successfully launched ASAT.
Source: usa.org and drdo