Balance of Payment (BOP):Definition and Components

Balance of Payment (BOP) of ac country can be defined as a systematic statement of all economic transactions of a country with the rest of the world during a specific period usually one year. The systematic accounting is done on the basis of double entry book keeping (both sides of transactions credit and debit are included). Economic transaction includes all such transactions that involve the transfer of title or ownership of goods and services, money and assets. 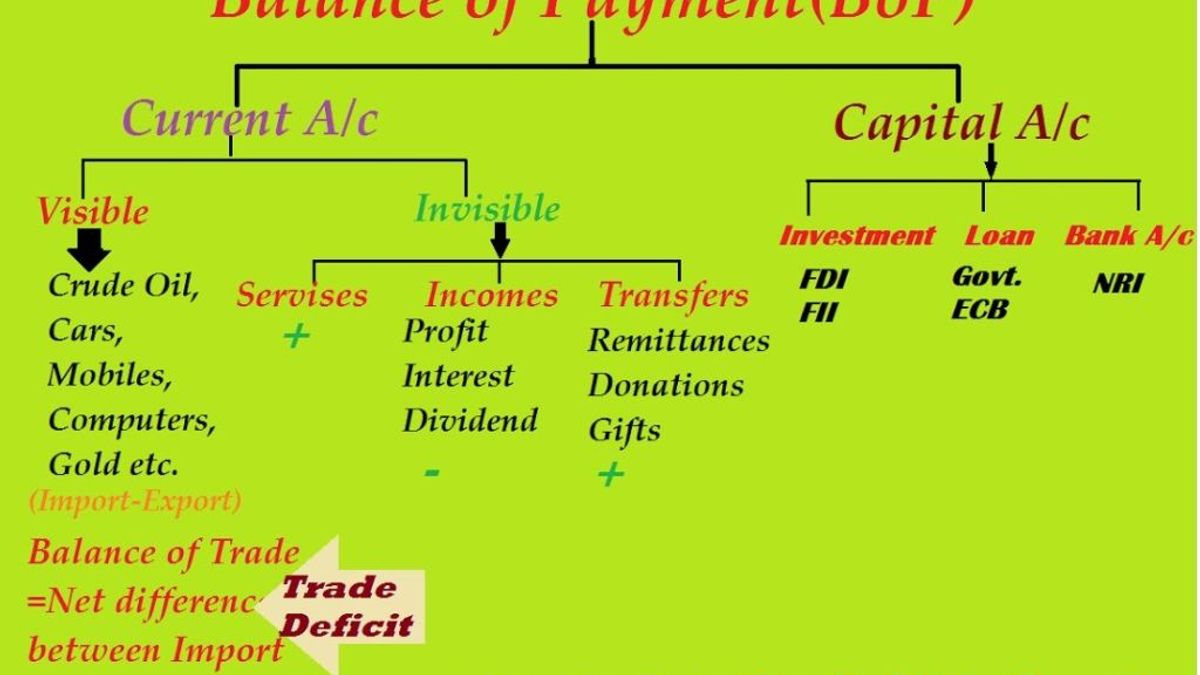 Definition of Balance of Payment (BOP)

Balance of Payment (BOP) of a country can be defined as a systematic statement of all economic transactions of a country with the rest of the world during a specific period usually one year.

The systematic accounting is done on the basis of double entry book keeping (both sides of transactions credit and debit are included). Economic transaction includes all such transactions that involve the transfer of title or ownership of goods and services, money and assets.

The Balance of Payments (BOP) is the method countries use to monitor all international monetary transactions at a specific period of time. Usually, the BOP is calculated every quarter and every calendar year. All trades conducted by both the private and public sectors are accounted for in the BOP in order to determine how much money is going in and out of a country.

If a country has received money, this is known as a credit, and, if a country has paid or given money, the transaction is counted as a debit. Theoretically, the BOP should be zero, meaning that assets (credits) and liabilities (debits) should balance. But in practice this is rarely the case and, thus, the BOP can tell the observer if a country has a deficit or a surplus and from which part of the economy the discrepancies are stemming.

Purposes of calculation of Balance of Payment:

1. The basic purpose of BOP accounting is to know the strength and weaknesses of the Economy in international relations.

2. By analyzing the BOP accounts of the last year one can come to know the overall gains and losses from international trade. It can be ascertained that whether composition and direction of international trade and capital movements have improved or caused deterioration in the economic condition of the country.

For preparing a BOP accounts, economic transactions between a country and rest of the world are grouped under two broad categories:

A. Current Account: It includes export and import of gods and services i.e. visible and invisible trade. This type of transaction changes (increase or decreases) the current level of consumption of the country.

• Within the current account are credits and debits on the trade of merchandise, which includes goods such as raw materials and manufactured goods that are bought, sold or given away (possibly in the form of aid). Services refer to receipts from tourism, transportation (like the levy that must be paid in Egypt when a ship passes through the Suez Canal), engineering, business service fees (from lawyers or management consulting, for example), and royalties from patents and copyrights. When combined, goods and services together make up a country's balance of trade (BOT).

• Receipts from income-generating assets such as stocks (in the form of dividends) are also recorded in the current account. The last component of the current account is unilateral transfers. These are credits that are mostly worker's remittances, which are salaries sent back into the home country of a national working abroad, as well as foreign aids that are directly received.

B. Capital Account: Inflow and outflow of capital including foreign investment, gold and foreign exchange reserves. This is of stock nature.

The capital account is where all international capital transfers are recorded. This refers to the acquisition or disposal of non-financial assets (for example, a physical asset such as land) and non-produced assets, which are needed for production but have not been produced, like a mine used for the extraction of diamonds.

The capital account is broken down into the monetary flows branching from debt forgiveness, the transfer of goods, and financial assets by migrants leaving or entering a country, the transfer of ownership on fixed assets (assets such as equipment used in the production process to generate income), the transfer of funds received to the sale or acquisition of fixed assets, gift and inheritance taxes, death levies, and, finally, uninsured damage to fixed assets.

In the financial account, international monetary flows related to investment in business, real estate, bonds and stocks are documented.

The current account should be balanced against the combined-capital and financial accounts. However, as mentioned above, this rarely happens. We should also note that, with fluctuating exchange rates, the change in the value of money can add to BOP discrepancies. When there is a deficit in the current account, which is a balance of trade deficit, the difference can be borrowed or funded by the capital account.

If a country has a fixed asset abroad, this borrowed amount is marked as a capital account outflow. However, the sale of that fixed asset would be considered a current account inflow (earnings from investments). The current account deficit would thus be funded.

When a country has a current account deficit that is financed by the capital account, the country is actually foregoing capital assets for more goods and services. If a country is borrowing money to fund its current account deficit, this would appear as an inflow of foreign capital in the BOP. When the export of a country exceeds the import, then BOP is termed as the favourable BOP or surplus BOP. But when import exceeds the export, then BOP is termed as the unfavourable or deficit BOP.