The air circulation, climate and weather system depend on the distribution of temperature over the surface of the earth. Here, we are giving the definition of the basic concepts related to the Atmospheric Circulation and Weather System, which is very useful for the competitive examinations like UPSC-prelims, SSC, State Services, NDA, CDS, and Railways etc. 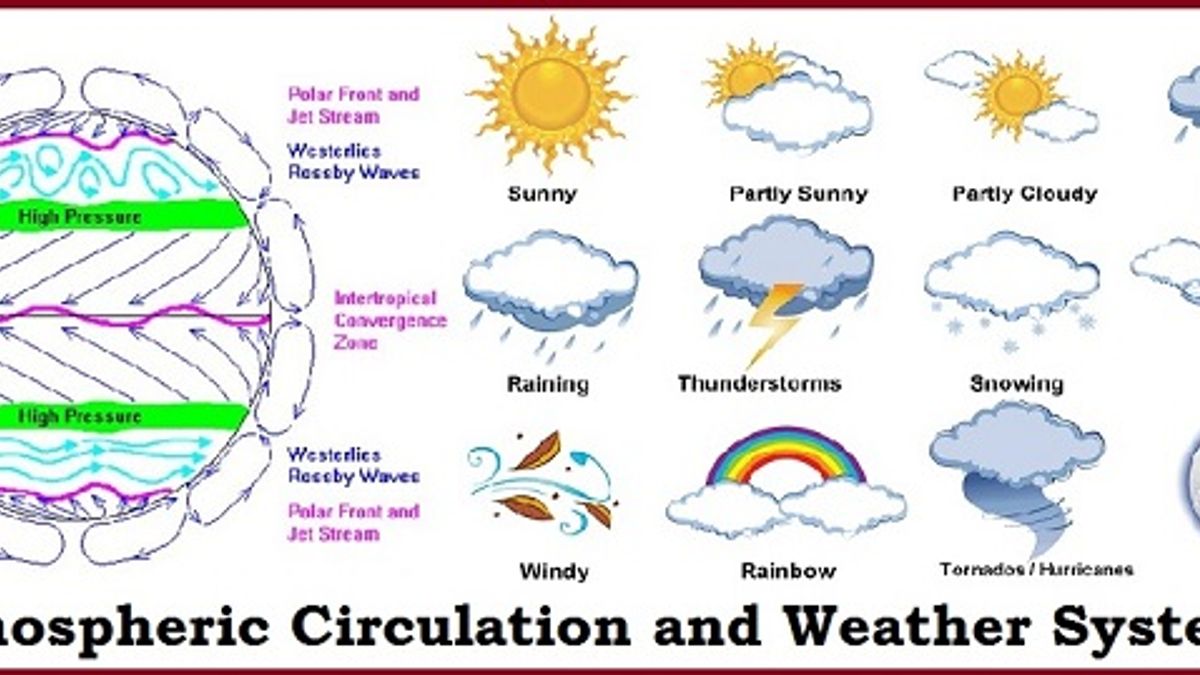 The air circulation, climate and weather system depend on the distribution of temperature over the surface of the earth. Atmospheric circulation is the large-scale movement of air by which heat is distributed on the surface of the Earth. It varies due to the variations in the atmospheric pressure. Here, we are giving the definition of the basic concepts related to the Atmospheric Circulation and Weather System, which will help the readers for better understanding.

The weight of a column of air contained in a unit area from the mean sea level to the top of the atmosphere is called Atmospheric pressure. In other words, it is the force per unit area exerted by the entire body of air above the specific area. It can be measured by mercury barometer or aneroid barometer. It can be expressed in several different systems of units like: millimetres (or inches) of mercury, pounds per square inch (psi), dynes per square centimetre, millibars (mb), standard atmospheres, or kilopascals.

The force generated by two surfaces that contacts and slide against each other is called Frictional Force. It has great impact on the speed of wind. It has highest impact on the elevation of 1-3 km and lower over the sea surface. It is the force applied to a unit area of surface. It can be expressed in Pascal’s (SI unit) or in dynes (cgs unit).

The horizontal motion of air is called wind. It distributes the heat and moisture across the planet that maintains a constant temperature. It form cloud and bring precipitation when the vertical moist air cools down.

It is movements of air repetitively and predictably driven by changes in large-scale weather patterns. In other words, it is the pattern of wind circulation is modified in different seasons due to the shifting of regions of maximum heating, pressure and wind belts.

The Local Winds are basically originated due to Convection from daytime heating; Unequal heating and cooling of the surface; and Gravity, including downdrafts.

The movement of local wind system from land to water at late night is called Land Breeze. It is created when the land is cooler than the water such as at night and the surface winds have to be very light.

The pressure gradient from sea to land is created and the wind blows from the sea to the land is called as Sea Breeze. It is created when the surface of the land is heated sufficiently to start air rising.

A volume of air that is defined by its temperature and the content of water vapour then called as Air Mass. It is classified by according to the source regions such as warm tropical and subtropical oceans; subtropical hot deserts; relatively cold high latitude oceans; very cold snow covered continents in high latitudes; and permanently ice covered continents in the Arctic and Antarctica.

The wind blows in mountainous region when the slopes get cooled and the dense air descends into the valley during night then it is called as mountain winds.

A wind that blows in the mountain valley during the day is called as Valley wind. It occurs when the slopes get heated during the day and air moves upslope.

It can define as the transition between two different air masses of different density. Cold, warm, stationery and occluded are four types of fronts.

It is a rotating, organized system of clouds and thunderstorms that originates over tropical or subtropical waters and has closed low-level circulation.

It is a storm resulting from strong rising air currents; heavy rain or hail along with thunder and lightning. It is caused by intense convection on moist hot days.

When severe thunderstorms sometimes spiralling wind descends like a trunk of an elephant with great force, with very low pressure at the centre, causing massive destruction on its way. Such a phenomenon is called a tornado. It is generally occur in middle latitudes.

Above concepts will help the readers to understand the Atmospheric Circulation and Weather System.