What is the Border Area Development Programme (BADP)?

The Border Area Development Programme (BADP) is an initiative of the Ministry of Home Affairs, Government of India and aims at meeting special developmental needs and well-being of the people living in remote and inaccessible areas near the International Boundary (IB). 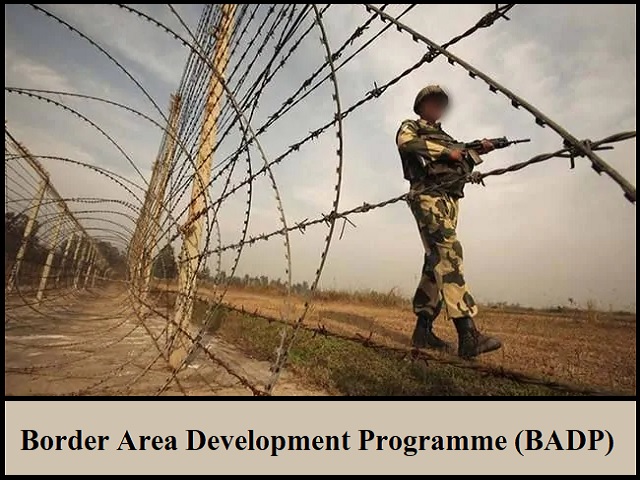 The Border Area Development Programme (BADP) is an initiative of the Ministry of Home Affairs, Government of India to adopt a comprehensive approach to Border Management in collaboration with the State Governments and Union Territories.

It is a Centrally Sponsored Scheme (CSS) which was introduced in the year 1993-94. In its initial phase, the scheme was implemented in the Western Border states with an aim of developing infrastructure to facilitate the deployment of Border Security Force (BSF). However, the purview of the programme was widened and socio-economic aspects such as education, health, agriculture and other allied sectors were included. During the eighth Five Year Plan, the coverage was extended to the Eastern States as well that shares a border with Bangladesh.

BADP aims at meeting special developmental needs and well-being of the people living in remote and inaccessible areas near the International Boundary (IB). It also provides the border areas with essential infrastructure by the conflux of BADS/other Central/State/UT/Local Schemes and via a participatory approach in six areas-- Basic Infrastructure, Health Infrastructure, Education, Agriculture & Water Resources, Financial Inclusion and Skill Development.

This will not only help in integrating these areas with the hinterland but will also create a positive perception of care by India, encouraging the people to live in border areas which in turn will lead to safe and secure borders.

The basic principles which guide the implementation of the BADP are as follows:

1- Projects for developing infrastructure in strategically important villages/towns are given priority. These are identified by Border Guarding Forces (BGFs).

2- Border Guarding Forces (BGFs) are a part of the decision-making process at all levels-- Planning, Execution and Monitoring.

3- The State/UT Level Screening Committee (SLSC/UTLSC) ensures convergence with schemes of line Ministries and State/UT Governments and other available resources to ensure holistic development of the strategically important villages/ towns in the border areas.

4- All the projects are evaluated on a regular basis through Social Audit mechanism in addition to the present mechanisms of the State/UT/Central Governments.

5- The States endeavour to achieve saturation of beneficiaries and creation of infrastructure under various Government Schemes by the year 2023.

6- The Districts compete amongst themselves on the lines of incremental changes and the best Districts are recognized and rewarded.

7- BADP has two components for comprehensive development of border districts. These are as follows:

1- Saturation of beneficiaries and the creation of an infrastructure in border areas by the convergence of various Government Schemes.

2- Border Area Development Scheme(BADS) for filling up the gaps to achieve desired levels of development.

Additionally, the program also covers census villages, semi-urban and urban areas which are located within 0-10 km distance from the first habitation from the International Boundary (IB).

The funds are allocated to the states on the basis of three parameters carrying an equal weightage:

Additionally, 15% weightage is given to hilly, desert and Rann of Kutch areas due to difficult terrain, scarcity of resources and relatively higher cost of construction, etc.

1- The funding pattern of BADS for the eighth North Eastern States and two Himalayan States of India will be in the ratio 90:10 (Centre Share:State Share). These states are Arunachal Pradesh, Assam, Manipur, Meghalaya, Mizoram, Nagaland, Tripura, Sikkim,  Himachal Pradesh and Uttarakhand.

2- The funding pattern of BADS for six border states will be in the ratio 60:40 (Centre Share:State Share). These states are Bihar, Gujarat, Punjab, Rajasthan, Uttar Pradesh and West Bengal.

3- The funding pattern of BADS for the UT of Jammu and Kashmir will be in the ratio 90:10 (Centre Share:UT Share) and for UT of Ladakh (UT with no Legislature), the Centre Share will be 100%.

During a given financial year, the distribution of funds are as follows:

1- 10% of the total allocated funds are kept reserved under BADS Reserve Fund and will be given as incentives to best performing States or Union Territories.

2- 10% of the total allocated funds are additionally allocated to the States/ UTs abutting Indo-China Border for taking up projects in the border districts of Arunachal Pradesh, Himachal Pradesh, Ladakh, Sikkim and Uttarakhand.

4- The pattern of funding is as per the norms applicable to Core Centrally Sponsored Schemes (Core CSS). The State or UT does not have a right to claim over the funds which were not released due to non-compliance of the provision of BADP guidelines.

5- Only 10% of the funds are allocated to States/UTs for the maintenance of assets created under BADS.

Monitoring and Review of BADP:

1- Annual Social Audit of the projects in border areas is carried out either by Gram Sabhas or similar bodies. The implementing agency also presents the status of the works taken up by them.

2- Prabhari Officers for different districts provides independent feedback on the development works undertaken in the border areas with a report every quarter.

3- SLSC or UTLSC monitors the implementation of works under BADP.

4- Quarterly progress reports (QPRs) is submitted to the Department of Border Management latest by 15th day after the closure of the quarter through the BADP Online Management System.

5- All the projects are geo-mapped and uploaded on the BADP Online Management System.

The policy matters are dealt with by the Empowered Committee of the BADP. The composition of such a committee is as follows:

1- The Committee deals with the matters related to the scope of the BADP, prescription of geographical limits in the States/UTs concerned within which the BADP will be implemented, modalities of implementation and so forth.

2- The Committee can also relax any norm of any scheme of any developmental Ministry with the approval of the competent authority to achieve the objectives of BADP.

3- The Committee can also reward the best performing districts by giving them additional allocation for projects using the performance-based reserve funds/ savings(if any) under BADS.

4- It also reviews the implementation of all the individual/family/community benefit schemes of Government of India in the border areas.

5- The Committee is further responsible for the approval of the five-year vision and annual plans along with monitoring the progress of the BADP.

6- A maximum of 2.5% of the allocated amount to the State/UTs can be kept reserve in a given financial year and utilized for taking up projects under BADP. The administrative expenditure cannot exceed a maximum of 1% of the funds allocated to the State/UT in the given year and is subject to a ceiling of Rs. 50 lakhs in an FY.

2- An amount equal to the pending UCs is deducted at the time of the release of the funds. The amount deducted is released to the respective States/UTs on the due provision of relevant UCs by 30 September of the FY. No claim on the remaining funds can be made after the said date.

3- The amount saved due to non-furnishing of relevant UCs is treated as 'savings' under BADS and is released to other State/UT fulfilling the conditions.

Sources of funding of BADP:

1- The Special Central Assistance (SCA) under the Border Areas Development Programme (BADP) is funded by the Government of India.

2- The land acquisition and construction of the departmental buildings, etc. are funded by the State Government.

B. Health infrastructure
(i) Construction of houses for Government doctors, paramedics and other Government
officials engaged in the health sector in border census villages/ habitations.
(ii) Building infrastructure (SHC/PHC/CHC) including their up-gradation.
(iii) Setting up of Government mobile dispensaries/ambulances.
(iv) Purchase of medical equipment in Government Hospitals.

The State/UT Government may undertake multiple infrastructure development projects in a village on a hub and spoke model.

I. Construction of infrastructure for Small Scale Industries.

What is the funding pattern of BADP?

On what basis funds are allocated to the States under BADP?

The funds are allocated to the States on the basis of three parameters carrying an equal weightage: (a) Length of the International Border (33%) (b) Population of border block (33%) (c) Areas of the border blocks (33%) Additionally, 15% weightage is given to hilly, desert and Rann of Kutch areas due to difficult terrain, scarcity of resources and relatively higher cost of construction, etc.

How many States are covered under the Border Area Development Programme (BADP)?

What is the Border Area Development Programme (BADP)?

The Border Area Development Programme (BADP) is an initiative of the Ministry of Home Affairs, Government of India to adopt a comprehensive approach to Border Management in collaboration with the State Governments and Union Territories.
Comment ()