India’s attempt to land a robotic spacecraft on moon’s South Pole seems failed on 7th September,2019. Initially, landing was smooth but later on the trajectory diverged from the planned path. Suddenly, the mission control room felt silent as communication from the lander was lost just above 2.1 kilometres away from the surface of the moon. Let us read more about it. 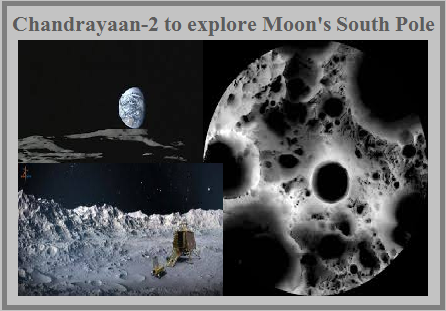 Why Chandrayaan-2 landing is focus on Moon's South Pole?

As we know that India’s Chandrayaan-2 is the ISRO’s second moon mission which was launched from Satish Dhawan Space Centre, Sriharikota  on 22 July, 2019  and it travelled around 3,84,000 km.

Unfortunately India could not get success in landing on the moon and lost the chance to become the 4th country to land on the moon. But this is not the end of all Indian space missions.

ISRO's  Chief Sivan confirmed that communication with the lander had been lost after 13 minutes when the Vikram began its descent.

Let's have a look on the Landing process of the lander.

How landing was planned?

After the final touchdown of Vikram lander, the Rover Pragyan came down from the ramp which lowered after two hours of landing.  So, we can say that Pragyan will come down and start its journey of moving around the Moon's South Pole area. The Pragyan after landing will carry out experiments on the Moon's surface for a period of one lunar day that is equal to 14 earth days and the main orbiter would continue its mission for a year. But this all planning failed.

Why landing is focus on Moon's South Pole?

The South Pole of the Moon remains shrouded in mystery. According to the scientists there is a possibility of the presence of water in the permanently shadowed areas around it. It is also said that the surface area at the South Pole of the Moon remains in shadow which is much larger than that of its North Pole and so the presence of water and minerals is expected.

According to ISRO, the South Pole region of Moon has craters that are cold traps and contain a fossil record of the early Solar System. Since billions of years, the craters of the moon's South Pole have been untouched by sunlight which has a record of undisturbed solar system's origin. It is estimated that the shadowed craters may hold nearly 100 million tons of water. In fact its regolith has traces of hydrogen, ammonia, methane, sodium, mercury and silver which make it an untapped source of essential resources. According to ISRO, its elemental and positional advantages make it suitable pit stop for future space exploration.

What is the goal of Chandrayaan-2 mission?

The goal of the mission is to discover better understanding about the Moon’s origin and its evolution by conducting topographical studies and mineralogical analysis. Few other experiments will also be conducted on the surface of the Moon. That is, Chandrayaan-2 mission will foster the findings of Chandrayaan-1.

We can't ignore the fact that till now no country has ever explored the South Polar region of the Moon whether it be a manned or unmanned mission. The South Polar region is far from the equator and is totally uncharted till now. In an international level, Chandrayaan-2 mission will give India a lead in space exploration.

Ans. On 2 September, 2019, Vikram Lander was separated from the Orbiter.

2. Why the name of the Lander is Vikram Lander?

Ans. ISRO has named Lander after the founder of ISRO and the father of Indian Space Program Vikram Sarabhai. He had established ISRO and also chartered the path for space programmes in India. This year is a centenary year of Dr. Vikram Sarabhai. So, to commemorate him and also to feel proud of our space programme, the Lander which is going to land on Moon is named as Vikram.

3. How does Lander will work?

Ans. The Lander is ISRO's new technology. The Lander has four legs which will stand on the Moon's surface which consists of very fine dust particles of almost few centimeters. So, to ensure that legs does not sink into the Moon's soil, it is made in the fashion that feets are slightly larger. Further, the Lander is covered from three sides with solar panel so whichever orientation it will land on the Moon will be able to catch the sunlight for generating its power. There is also a green shaped door, after landing on 7 September, 2019 the door will open and it will become a ramp from where the Rover will roll out into the soil of the Moon.

4. What is the weight of the Lander?

Ans. The wet weight of the Lander is 1.471 kg and dry weight weight is 626 kg. Here, the wet weight means the weight and fuel together. Dry weight is without the fuel. That is during the landing the half of the weight will be of fuel.

5. What is the power generation capacity of the Lander?

Ans. The power generation capacity of the Lander is 650 W.

6. What is the life of Lander and Rover?

Ans. The life of the Lander and Rover is 14 days. Moon revolves around the Earth so, half of the moon laid by Sun and half not. Therefore, at the same time there will be day and night on the Moon. The time taken for the moon to go around the axis and also go around the earth is roughly same that is about 27.3 days or we can say about 27 days. So any time on the surface of moon the day time will be for about 14  days plus. The Lander will be able to work in the day time only due to solar energy but during night time it is so much cold that temperature drops around - 230 degrees. The Lander will not be able to work during night time.

7. Why Lander has seismometer?

Ans. Earthquakes occur on Earth but in Moon it is known as Moonquakes. When Moon shrinks and become in new wrinkle form than there is one kind of Moonquake. Why this happen? The core of the Moon is very very hot but over the time it cools and shrinks. Second reason for Moonquake is due to the falling of an object on the Moon. When rocks are big and falls on the Moon it causes Moonquake. It can be deep, shallow etc.
Now, Chandrayaan-2 Lander Vikram will land on the South Pole of the Moon and till now no other spacecraft have gone there. It is important to study about the Moonquakes in this region because in future if colony will develop it will be in this region. So, to study the seimographic effect in this area  Vikram the Lander has seismometer.

8. How many payloads are there in the Vikram Lander?

Ans. The five-legged lander will have three instruments on board. They are the Radio Anatomy of Moon-Bound Hypersensitive Ionosphere and an Atmosphere Probe (Rambha) that will measure the density of the lunar sub surface and changes around it. Further, the Chandra Surface Thermophysical Experiment (ChaSTE) will be used to measure the thermal temperature around the South Pole of the moon. And thirdly, is the instrument for Lunar Seismic Activity (ILSA) which will measure the seismicity or quake or tremor-potential of the region.

9. Why Vikram Lander is landing on South Pole region of Moon?

Ans. - Due to the possibility of water in the form of ice in the craters.
- Possibility to have right kind of minerals.
- If a Lunar base is going to be establish then it will be South Pole region of Moon.

Ans. About 15 minutes 36 seconds Vikram Lander will take to soft-land on the Moon and will travel around 30 kms. This will takes place on 7 September, 2019. This type of soft-landing is new to ISRO and so there is 15 minutes of terror.

11. Why there is difficulty in Landing Vikram Lander?

Ans. Due to the atmosphere of the Moon it is not easy to land. With the help of retro rocket science  ISRO will land Vikram Lander on 7 September, 2019 on the surface of the Moon.

For more detail about Chandrayaan-2 Mission refer the given link below:

India's Chandrayaan-2 Moon Mission: All you need to know