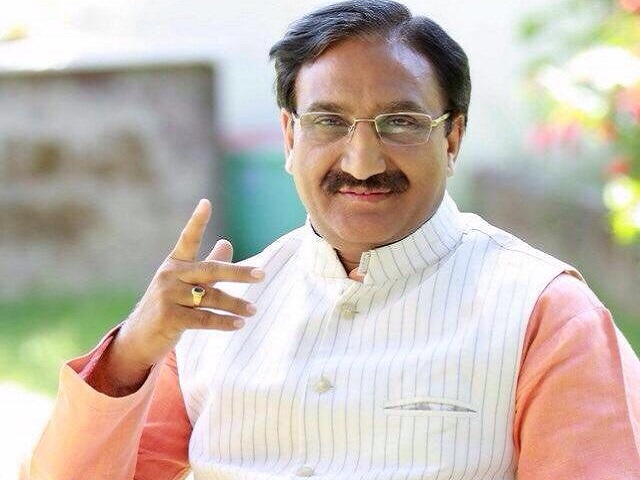 Ramesh Pokhriyal is the Minister of Human Resource Development in the second Modi Ministry. He is also known by his pen name Nishank. He represents Haridwar Constituency of Uttarakhand in the 17th Lok Sabha.

Ramesh Pokhriyal was born on July 15, 1959, in Pinani, Pauri Garhwal, Uttarakhand to the couple Paramanand Pokhriyal (Father) and Vishambhari Devi (Mother). His father was a gardener.

On May 7, 1985, Ramesh Pokhriyal married Kusumkanta Pokhriyal and the couple has three daughters. One of the daughters, Arushi Nishank, Shreyasi Nishank and Vidushi Nishank. Arushi Nishank is an Indian Classical Dancer. On November 11, 2012, his wife died in Dehradun at the age of 50.

Ramesh Pokhriyal started his career as a teacher in Saraswati Shishu Mandir which was affiliated with RSS ( Rashtriya Swayamsevak Sangh). In the year 1991, Pokhriyal defeated 5 times Congress MLA from Karnaprayag constituency in the undivided Uttar Pradesh and became a member of Uttar Pradesh Legislative Assembly.

In 1993 and 1996, he was re-elected from the Karnaprayag constituency. In the year 1997, he was appointed as Uttaranchal development minister.

From 2009 to 2011, Ramesh Pokhriyal served as the Chief Minister of Uttarakhand. He also served as a member of the 17th Lok Sabha session and also as the chairman of the Assurance Committee. He represented Haridwar constituency in the Lok Sabha.

From 1991 to 2012, for the five consecutive terms, Ramesh Pokhriyal was the MLA of Uttar Pradesh and Uttarakhand. In 2014, Pokhriyal resigned from Doiwala constituency and was elected from the Haridwar constituency. On May 30, 2019, he was sworn in as the HRD Minister in the 2nd Modi Cabinet.

Ramesh Pokhriyal with his pen name Nishank has written several novels, stories and poems. He has so far authored 44 books in Hindi which have been translated to English and other languages. Critics have referred his literary works as 'heavy on patriotism, light on literary quality'. Many of his books were published when he was CM of Uttarakhand by private publishers-- Vani Prakashan and Diamond Books.

Ramesh Pokhriyal landed in a controversy after he made a claim that 'Astrology is the biggest science and is in fact, above science. We should promote it.'

Referring to Lord Ganesha, he stated that the ancient Indians had the knowledge to transplant a severed head. He further claimed that Sage Kanada had conducted a nuclear test lakhs of years ago, which was a false claim as the sage is likely to have lived two thousand years ago as per historical pieces of evidence.

Pokhriyal has listed two different dates of births on official documents. One of them is attributed to Hindu horoscope.

In 2019, an appeal was filed in the President's office to disqualify Pokhriyal from the ministerial post over his fake doctorate degrees. This is because, in the 1990s, the Open International University for Complementary Medicines of Colombo, Sri Lanka conferred two D.Litt. degrees for his contribution to literature and science. But the irony is that OIU is neither registered as a foreign university nor as a domestic university in Sri Lanka, as confirmed by the University Grants Commission of Sri Lanka.

In 2019, after being appointed as the HRD Minister, Pokhriyal issued a directive that all the files forwarded to him must be in Hindi.

In August 2019, at IIT Bombay, made a false claim that the U.S. space agency NASA had acknowledged that talking computers could be developed only by employing Sanskrit, which he described as 'the world's only scientific language'.