10 questions and answers on the Central Council of Ministers are given to enhance your General Knowledge which will also help in the preparation of various competitve examinations like IAS, SSc, railways etc. 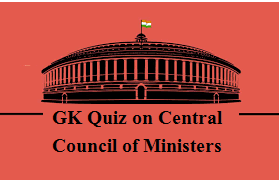 The Central Council of Ministers consists of senior ministers known as cabinet ministers, junior ministers or ministers of state and rarely deputy ministers. They exercises executive authority in the Republic of India.

1.The Parliamentary System of government in India is taken from.......

Explanation: The parliamentary system of government in the constitution of India is based on the British model.

2. Which of the following statements is not correct?

(A) Article 74 deals with the Council of Ministers

(C) The Central Council of Ministers is the head of India's political and administrative system.

(D) Article 75 is related only to the appointment of ministers.

Explanation: Article 75 deals with the appointment of ministers, as well as their tenure, liability, oath and salaries.

3. Which statement is not correct in the context of Article 75?

(A) The President will appoint the Prime Minister

(B) The number of members of cabinet will not exceed 15% of the total number of Lok Sabha.

(C) The minister shall hold the office till the pleasure of the Prime Minister.

(D) Council of Ministers is collectively responsible to the Lok Sabha.

Explanation: Minister will hold office till the pleasure of the President of India.

4. The salary and allowances of the Ministers of the Government of India are determined by whom?

Explanation: The salaries and allowances of the Ministers of the Government of India are determined by the Parliament.

5. What is not the correct statement?

(A) If a minister is not the member of any house at the time of becoming a minister, then he will have to get a membership of Lok Sabha within 6 months.

(B) A minister who is a member of lower House can participate in the proceedings of the upper house.

(C) A minister can vote only in that house whose membership he holds.

6. It is necessary to be a member of a house after 6 months of becoming a minister, but in what way should a member of the house be elected?

(C) either by election or nomination.

Explanation: Membership can be obtained either by election or nomination within 6 months.

7. What does it mean that the Council of Ministers is collectively responsible to the Lok Sabha?

(C) All ministers will act as a team

8. When the Lok Sabha passes a no confidence motion against the Council of Ministers .........?

(D) Only the Prime Minister has to resign

Explanation: When the Lok Sabha Minister passes a no confidence motion against the Council of ministers, then all the ministers (either elected from the Lok Sabha or Rajya Sabha) have to give resignation.

9. If any minister does not agree with any decision of the Cabinet ...

(A) The president can remove him without asking the Prime Minister

(B) He has to resign

(C) He can remain a minister

Explanation: He has to resign. In 1953, due to difference with cabinet on Hindu code bills, Dr. Ambedkar had to resign.

10. Who said that "The cabinet is the pivot around which the whole political machinery revolves"?