Explained: What is Hydrogen Economy?

The hydrogen economy is an envisioned future where hydrogen is used as fuel for vehicles, energy storage and long-distance transport of energy. 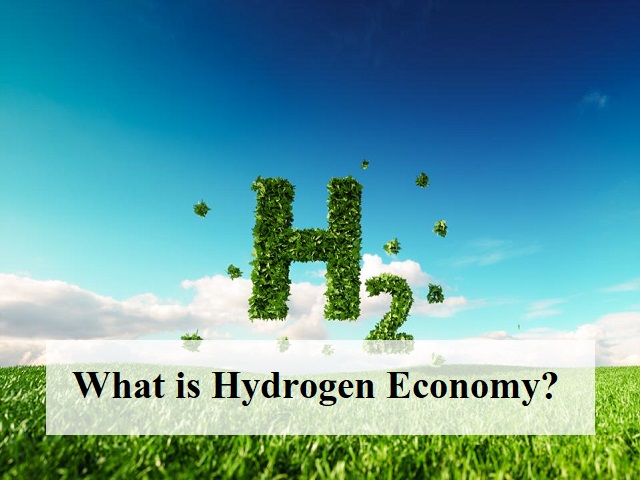 In a bid to tap the energy potential of the most abundant element in the universe, Hydrogen, Finance Minister Nirmala Sitharaman announced a National Hydrogen Energy Mission (NHEM) to transform transportation in India. The mission was announced during Union Budget 2021-22.

On 9 February 2021, the Ministry of New and Renewable Energy (MNRE) Secretary Indu Shekhar Chaturvedi stated that the Government of India may come up with a draft on the initiative in the coming months-- a roadmap for using hydrogen as an energy source.

In 2020, the Ministry of Road Transport and Highways issued a notification proposing amendments to the Central Motor Vehicle Rules of 1989, to include safety evaluation standards for hydrogen fuel cell-based vehicles.

In 2016, Dr. K. Kasturirangan committee, set up by MNRE, prepared reports on Hydrogen and Fuel cells and suggested a way forward on the same.

In 2006, the Ministry of New and Renewable Energy (MNRE) constituted a high-level committee to come up with a hydrogen energy roadmap. The roadmap was laid to provide a blueprint for hydrogen energy development in India and underscored the technology gaps and challenges in the introduction of hydrogen on large scale, in a phased manner.

What is Hydrogen Economy?

Hydrogen is a promising energy carrier and has the potential to address various energy sector challenges and technically from the application point of view, substituting conventional fuels. Its use can reduce CO2 related emissions significantly and decarbonise the entire value chain, enabling reduced emissions and climate change threats.

Hydrogen can also bridge the gap between supply and demand, in both a centralized or decentralized manner, thereby enhancing the overall energy system flexibility. Hydrogen can be used to meet both seasonal and daily supply-demand mismatch in the case of renewables. In rural India, where there is no access to the grid, the use of hydrogen can provide energy services.

In 1970, the term 'hydrogen economy' was coined by John Bockris. He mentioned that a hydrogen economy can replace the current hydrocarbon-based economy, leading to a cleaner environment.

At present, the current global demand for hydrogen is 70 million metric tons, most of which is being produced from fossil fuels-- 76% from natural gas and 23% from coal and remaining from the electrolysis of water-- consumes 6% of the global natural gas and 2% of the global coal. This results in CO2 emissions of around 830Mt/year out of which only 130Mt/year is being captured and used in the fertilizer industry.

Hydrogen production from natural gas without CCUS is the most economic method at a cost of USD1/kgH2 in the Middle East, while the electrolysis of water is the most expensive one. However, if the renewables meet the heat/ electricity requirements, hydrogen is produced using electrolysis or thermochemical method.

In India, hydrogen is being commercially produced in the fertilizer industry, petroleum refining and chemical industries and also as a by-product in chlorine alkali industries. A limited amount of hydrogen is also produced by electrolysis.

Hydrogen as an alternative to fuel

Hydrogen is a zero-carbon fuel and is considered an alternative to fuel and a key source of clean energy. It can be produced from renewable sources of energy such as solar and wind. At present, there are a number of ways to produce hydrogen, but the most common method is natural gas reforming and electrolysis.

India's goal of attaining 175 GW of renewable energy capacity by 2022 and to decarbonise by 2050 got an impetus in the Union Budget 2021-22. The Budget allocated Rs. 1,500 crores for renewable-energy development and Hydrogen Energy Mission.

Companies such as Indian Oil Corporation and NTPC Ltd are working towards this technology. IOC has patented the technology for producing H-CNG-- 18% hydrogen in CNG, directly from natural gas without restoring to conventional blending. It is also planning to set up a dedicated unit to produce hydrogen to run buses at its Research and Development Centre in Faridabad.

On the other hand, state-run NTPC Ltd is planning to start a premium hydrogen fuel bus service on the Delhi-Jaipur route (the first intercity service on the aforementioned technology). It is also considering to set up a green hydrogen production facility in Andhra Pradesh.

The Government of India is planning to focus on five key areas: (a) Research and Development (b) Demand creation (c) how to use it in the industry (d) how to create an eco-system (e) how to bring it on board along with international partnerships.

1- It is well-known that India's electricity is heavily coal-dependent. Thus, the introduction of Hydrogen will replace fossil fuels and will address pollution levels and oil-price hike.

2- Hydrogen is the most abundant element in the Universe. It is lighter, energy-dense and is two to three times more efficient than petrol.

3- Hydrogen will benefit transportation which contributes 1/3 of India's greenhouse-gas emissions, iron and steel and chemical sectors.

1- Grey Hydrogen: It constitutes India's bulk production and is extracted from hydrocarbons and is a byproduct of CO2.

2- Blue Hydrogen: It is sourced from fossil fuels. By-products of CO and CO2 is captured and stored. It is better than grey hydrogen.

3- Green Hydrogen: It is generated from renewable sources of energy such as solar and wind. The electricity splits water into hydrogen and Oxygen. It is a by-product of water and water vapour.

What is Green Hydrogen?

1- It has near-zero carbon footprints.

3- It is stored in tanks like CNG and integrated into cars' bellies, unlike CNG.

4- It is lighter than heavy lithium-ion batteries and is best for long haul trucks and commercial vehicles.

1- It has only three manufacturers-- Honda, Toyota and Hyundai.

3- There are less than 500 hydrogen stations globally.

4- It is highly combustible and is stored at very high pressure, up to 700 bar. The tank is outside the passenger bay.

Hydrogen is an energy carrier and not a source of energy. It is transformed into electricity via a fuel cell stack before it can be used to power a car or a truck. A fuel cell converts chemical energy into electric energy with the help of an oxidation-reduction reaction.

Hydrogen is drawn from an onboard pressurised tank and made to react with a catalyst inside each individual fuel cell that is made from platinum. As hydrogen passes through a catalyst, it produces an electric current that is used to power vehicles.

In 1874, Science fiction writer, Jules Verne set out a prescient vision of the world in The Mysterious Land where water will be used as a fuel and generate an inexhaustible source of heat and light, of an intensity of which coal is not capable.

In the year 1937, a German passenger airship, LZ129 Hindenburg, used hydrogen to fly across the Atlantic but exploded while docking at the Naval Air Station Lakehurst in New Jersey, killing at least 36 people.

In the 1970s, soon after the oil price shocks, the possibility of replacing fossil fuels with hydrogen was considered seriously. Honda, Toyota and Hyundai have since then started commercialising the technology on a limited scale.

It is to be noted that hydrogen is not found freely and has to be extracted from naturally occurring compounds such as water. Although Hydrogen is a clean molecule, the process of extracting is energy-intensive.

What is the 'Gig Economy' and who are referred to as 'Gig Workers'?

State of the Economy Report 2020: What is V-shaped economic recovery?