7th International Yoga Day 2021: In India, the celebration of the day will be held virtually because of the COVID-19 pandemic. The programme will be held by the Union Ministry of AYUSH and it would start at 6:30 am. Let us have a look at the benefits of yoga and celebrations since 2015.

Ministry of AYUSH (MoA) is calling the public at large to write and compose a Jingle for the upcoming International Day of Yoga, 2021. It should be in the official Indian language as mentioned in the Eighth Schedule of the Indian constitution along with English and other UN languages.

PM Narendra Modi urges people to make yoga a part of daily life as according to him peace and harmony are related to Yoga.

It should be apt, relevant, and appealing. It should aim to drive awareness and adoption of Yoga by people of all ages. It should focus on the cause of Yoga to serve as a tool in the betterment of the health and wellbeing of the community, mainly improving physical and mental health.

It should encourage people to participate in the observance of the International Day of Yoga 2021. It may deal with the importance of the regular practice of Yoga to boost the immunity level and to combat COVID-19, like a stress buster, etc.

Participant has to provide a script and a jingle of 25-30 seconds duration in any official language as per the Eighth Schedule of the Indian constitution along with English and other UN languages. It should be easily comprehensible and connects with the public at large.

The entry as a high-quality audio file of the participants should be uploaded to any media platform such as SoundCloud, YouTube, Google Drive, Dropbox, etc. Also, enter the publicly accessible link in the comments section. In the form of a pdf document, the script should be submitted. The winner would get INR 25,000 cash prize. The last date of submission is 21st June 2021.

International Day of Yoga is celebrated every year on 21 June to raise awareness worldwide about the benefits of Yoga in daily life. Yoga brings balance between body, soul, and mind. It helps us to understand the purpose of life and how to survive in the changing environment. "PM Narendra Modi at Jharkhand capital Ranchi urged people "We should make efforts to take yoga from cities to villages and tribal areas. Yoga is above religion, caste, colour, gender, and region, it is above everything,"

Yoga is an ancient practice that brings together physical, mental disciplines to achieve a peaceful body and mind. Yoga is a form of exercise that is performed through diet, breathing, and physical posture. International Day of Yoga is also known as World Yoga Day.

The 7th International Day of Yoga 2021 theme is "Yoga for well-being".

The 6th International Day of Yoga  2020 theme was 'Yoga for Health-Yoga at Home'.

The theme of the 5th International Day of Yoga  2019 is "Climate Action". In the United Nation, it will be celebrated a day before that is on 20 June, 2019 with 'Yoga with Gurus' and followed by a panel of discussion on 21 June.

The Climate Action theme focuses on the way how yoga can help us to solve the problem of climate change and also it brings a lot more benefits to the lives of people. It is necessary to work towards climate change. The sense of respect for mother earth overcomes regular yoga practitioners that will help people to act in a certain way at home and in the working environment to work and build a better future.

The theme of International Day of Yoga  2018 was “Yoga for Peace”.

The Theme of International Day of Yoga 2017 was “Yoga For Health”.

The Theme of International Day of Yoga 2016 was “Connect the Youth”.

The Theme of International Day of Yoga  2015 was “Yoga For Harmony And Peace”.

The word ‘yoga’ is derived from Sanskrit and means ‘to join’/to unite’. On 11 December, 2014, United Nations General Assembly declared to celebrate International Day of Yoga on 21st June every year by resolution 69/131. It was declared by the call of Indian Prime Minister Narendra Modi when he addressed United Nations General Assembly on 27 September, 2014 and asks for adopting 21st June as an International Yoga Day to get all the benefits of yoga to the people around the world. No doubt in Indian history, the declaration of International Day of Yoga is a great and proud moment.

Finally, it was declared on 11 December, 2014 by the United Nations General Assembly. First time in history it happened that the initiative of any country has been proposed and implemented by the UN within 90 days. Sam Kutesa, President of UN General Assembly, announced to celebrate the International Yoga Day on June 21 and more than 170 countries supported the Yoga Day proposal. From this it came to light that people also know about the benefits of yoga, some of which are visible and some are invisible.

Let us tell you that the resolution was adopted under the Global Health and Foreign Policy by the General Assembly in order to provide an approach towards health and well-being.

Do you know why our PM Narendra Modi has suggested 21st June as International Day of Yoga because 21st June is the longest day in the Northern Hemisphere has much significance in different parts of the world?

Various events will be organized all over the world on International Day of Yoga, where people from different places gather to practice yoga. In India also, several events will be organised. In pre-decided places, people gather in the morning and practice yoga under the guidance of trained yoga teachers and spread awareness about its benefit to health and the environment.

In various schools and colleges, several yoga practice sessions are organised. Prime Minister distributed Yoga Awards 2019. On 21st June, 2019 a special sale of yoga essentials like mats, tees, etc. was organised at Friends of Meditation, Naraina, New Delhi. But in 2020, the celebration was at home with family members and online due to the COVID-19 pandemic. 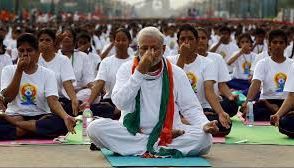 This year also the celebration goes online due to the pandemic. Activities that are indulged in this day include leveraging social media platforms like Instagram, to spread awareness and connect with people on this issue.

Due to COVID-19 pandemic, the celebration of International Day of Yoga 2020 was online. Yoga was practiced at home with family members.

On 21 June, 2018 at Dehradun in Uttarakhand, the International Day of Yoga was celebrated. Prime Minister Narendra Modi with around 55,000 enthusiasts performed Yoga.

On 21 June ,2017 at Lucknow in Uttar Pradesh, the International Day of Yoga was celebrated where other new records were created. People from around 150 countries participated and the number of participants was up to 51,000.

On 21 June, 2016, the AYUSH Ministry organized an event "The National Event of Mass Yoga Demonstration", at Chandigarh, in which Prime Minister Narendra Modi and many other people participated.

On 21 June, 2015, the Indian Prime Minister and around 36,000 people had celebrated the first International Day of Yoga at Rajpath in New Delhi. 21 yoga mudras or yoga postures for 35 minutes were performed there.

The ceremony had established two Guinness World Records: the first to be the largest yoga class and secondly the largest number of nationalities from 84 countries participated in the event. This award was presented to the Ministry of AYUSH and received by AYUSH minister Shripad Yesso Naik.

Source: www.hongkong-desi.com
- Yoga helps to maintain a balance between oneself and the environment.

- Yoga acts as an aid to one's health.

- Yoga brings a balance between body, soul, and mind.

- It helps us to deal with several problems, worries etc.

- By regular practice of yoga, an individual can rid of health-related problems.

- Removes toxins from the body.

- Remove negative thoughts from the mind.

- Reduces stress and tension in the physical body.

- The person feels rejuvenated and energized.

- Yoga gives the power to control the body and mind.

Some interesting facts about Yoga

- The father of yoga is known as Maharshi Patanjali who compiled 195 Yoga Sutras that became the foundation of Yoga philosophy.

- Some scholars believed yoga incorporated elements from the Stone Age. As in the Stone Age, Shamanism was prevalent and is a healing practice connected to nature. Yoga is not derived from Shamanism but the two have similar features.

- On 21 June, 2015 at International Yoga Day, the Indian Postal Service released a stamp for yoga which has an outline of a seated yogi with the Anjali Mudra overhead.

- Yoga is originated in India and is the oldest physical discipline. Yoga is over 5000 years old.

- The world's oldest yoga teacher is Bette Calman (85 years old) according to the Guinness World Records.

No doubt the regular practice of yoga will transform and broadens the perspective of life. It is an invaluable gift of India's ancient tradition which is around 5000 years old. Yoga is not only about exercise and about various asana but also helps to discover the sense of oneness with yourself, the world, and nature. Let us celebrate together International Yoga Day, not only practicing yoga for one day but to make it a part of life. this year celebrate International Yoga at home with the family members.