All Indian scripts are derived from Brahmi. There are three main families of scripts: Devanagari; Dravidian; and Grantha. There are many languages in the Ancient Indian script, such as Sanskrit, Pali, and Hindi. In this article, we are giving the list of Ancient Indian Scripts, which is very useful for the competitive examinations like UPSC-prelims, SSC, State Services, NDA, CDS, and Railways etc. 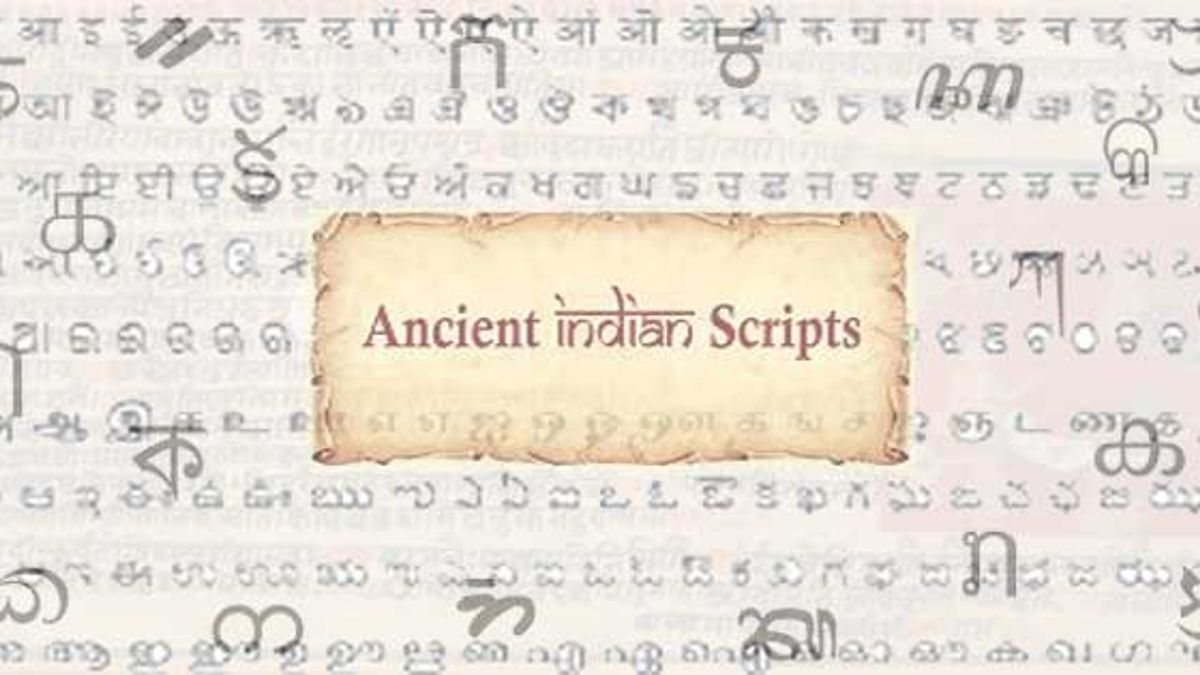 There are many languages in the Ancient Indian scripts, such as Sanskrit, Pali, and Hindi. Not many people know these languages anymore. But, it’s very important to understand it because it can teach important stories that were written in these languages that no one tells anymore. These stories are related to the gods and goddess, culture, and stories about India.

In India, majority of languages are written in Brahmi-derived scripts such, as Devanagari, Tamil, Telugu, Kannada, Odia, Eastern Nagari - Assamese/Bengali, etc., except Urdu which is written in a script from Arabic, and Santhali use independent scripts.

It refers to the script used by the people belonging to the Indus valley civilisation. It has not been deciphered yet. Some people have argued that this script was the predecessor of the Brahmi script. This script is an example of Boustrophedon style as in one line it is written from left to right while in others it is written from right to left.

Brahmi is the originator of most of the present Indian scripts, including Devanagari, Bengali, Tamil, and Malayalam etc. It developed into two broad types in Northern and Southern India, in the Northern one being more angular and the Southern one being more circular. It was deciphered in 1937 by James Princep. Its best examples are found in the rock-cut edicts of Asoka.

It is the sister script and contemporary of Brahmi. It was written from right to left. It was used in the Gandhara culture of North-Western India and is sometimes also called the Gandhari Script. Its inscriptions have been found in the form of Buddhist Texts from present clay Afghanistan and Pakistan.

It is also known as the Late Brahmi script. It was used for writing Sanskrit in the Gupta period. It gave rise to the Nagari, Sarada and Siddham scripts which in turn gave rise to the most important scripts of India such as Devanagari, Bengali etc.

It was an Eastern variant of the Gupta script. It is an early form of the Devanagari script. It branched off into many other scripts such as Devanagari, Bengali, and Tibetan etc. It was used to write both Prakrit and Sanskrit.

It is the main script at present to write standard Hindi, Marathi and Nepali as well as Santhali, Konkani and many other Indian languages. It is also used presently to write Sanskrit and is one of the most used writing systems in the world. It is composed of Deva meaning, (God) and Nagari meaning, (city), which meant that it, was both religious and urbane or sophisticated.

Kalinga was the ancient name of Odisha and this script was used to write an ancient form of Oriya. It is visually close to the original Brahmi. Oriya language presently uses a different script, which has been derived from Bengali script.

It is one of the earliest Southern scripts to originate from Brahmi. It branched off into Tamil and Malayalam scripts, which are still used to write those languages, It is also the predecessor of the Sinhala script used in Sri Lanka. A variant of Grantha called Pallava was taken by Indian merchants in Indonesia, where it led to the development of many South-East Asian scripts. It was used in Tamil Nadu to write the Sanskrit Granthas and hence, was named Grantha.

It is a descendant of Brahmi and marks the birth of the dedicated Kannada script. It led to the development of modern Kannada and Telugu scripts. It was used to write Sanskrit, Konkani, Kannada and Marathi.

It is the script used to write the Tamil language in India and Sri Lanka. It evolved from Grantha, the Southern form of Brahmi. It is a syllabic language and not alphabetic. It is written from left to right.

According to the epigraphers- All Indian scripts are derived from Brahmi. There are three main families of scripts:

1. Devanagari, which is the basis of the languages of northern and western India: Hindi, Gujarati, Bengali, Marathi, Dogri, Panjabi, etc.

2. Dravidian which is the basis of Telugu, Kannada

3. Grantha is a subsection of the Dravidian languages such as Tamil and Malayalam, but is not as important as the other two.