These are one of the most spectacular things to watch in the night sky and have captivated people for thousands of years.

Are you curious about aurora borealis and what causes them?

We have answered all these questions and more below.

What is Aurora Borealis?

Aurora Borealis is a beautiful sight of dancing lights that can be seen in the high-altitude regions of the Northern Hemisphere. The best time to watch the northern lights is between late September to Late March.

Similar to the Aurora Borealis, there exists another similar phenomenon called Aurora Australis which can be witnessed in the Southern Hemisphere.

Aurora Borealis is caused due to a celestial phenomenon occurring in the sun known as solar storms which causes releases of a large mass of electrically charged particles at very high velocity ( sometimes in excess of two million km in an hour).

On reaching the poles these particles interact with gases like nitrogen, oxygen and ozone present in the atmosphere which causes the gas to become heated and release energy in the form of lights.

The process by which gases become heated and release energy is called excitation.

This is the reason why aurora can be seen concentrated mostly in the north and south poles. 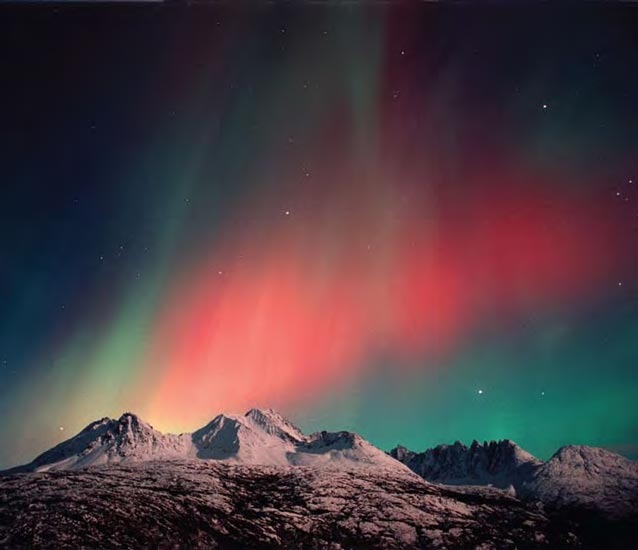 The combination of particles from the sun with the atmospheric gases results in a vibrant pattern across the sky, you can witness green, violet, red or pink hues dancing across the sky in Aurora Borealis.

The deep red and green colour is due to the oxygen molecules while the pink, purple and blue or shades of blue are due to interaction with nitrogen. The deep red colour is caused by the high-altitude oxygen.

Some of the best places to watch Aurora Borealis are in Canada, Norway, Iceland, Alaska, Sweden etc.

Aurora Borealis is visible in which hemisphere?

Aurora Borealis is visible in the Northern Hemisphere.

What is the other name for the Aurora Borealis?

The other name for the Aurora Borealis is the Northern Lights.
Get the latest General Knowledge and Current Affairs from all over India and world for all competitive exams.