Spot The Difference: Can you spot 7 differences in 19 seconds?

Spot the Difference: Two similar images are placed side by side but differ from each other. Spot seven differences within 19 seconds. Test your level of intelligence and observation skills with this challenge now.
Mrigank Chakraborty Updated: Nov 18, 2022 15:50 IST
Spot 7 Differences in 19 Seconds

Individuals, groups, or teams can all undertake this activity. These kinds of activities are one of the most effective ways to enhance an individual’s ability to focus and observe things closely.

What makes this activity all the more interesting is the addition of a time limit. Setting a time limit is a good parameter to judge the capability and observation skills of an individual.

Spot The Difference: Can you spot 20 differences in 47 seconds?

In the image shown above, you can see two kids playing as well as learning. One of the kids is a girl, and the other is a boy. The girl can be seen being lifted in the air as she grasps three star-shaped balloons.

The boy is star gazing with a telescope, we can see the ground with a green cover. The planet Saturn can be seen with its rings.

The two images that are shown look identical. Now, as suggested by the title, there are 7 differences between these identical images, and you need to spot the differences within 19 seconds.

Time will be over pretty quickly.

Brain Teaser: Find how many people are there in the office in 19 seconds

While some differences are easy to notice, others take time.

People who have spotted at least 5 differences did a great job.

Curious to know the difference between the two pictures?

Optical Illusion: Can you find the bird in 7 seconds? 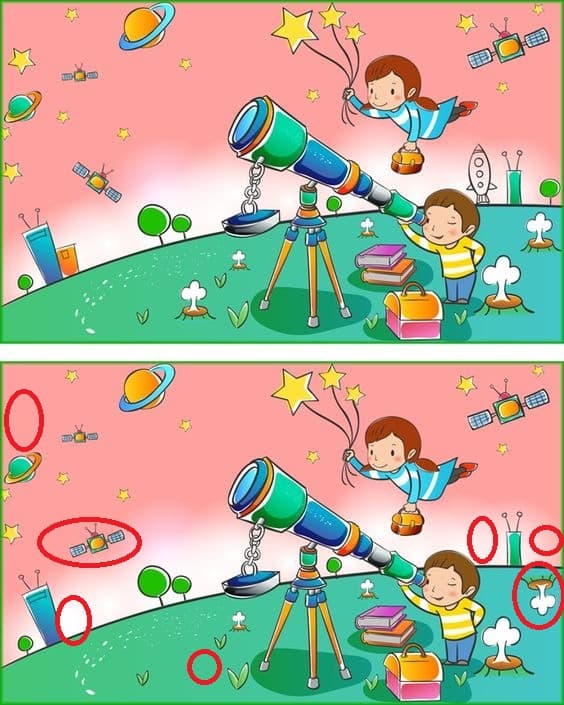