Tiangong: All about China's Space Station and space war speculation in US report here

The United States of America has reported recently that China may be increasing its manufacturing of space weapons that could destroy satellites. Can this mean a space war preparation or is Tiangong space station of China a step in this direction? Let us find out below.

Recently as per US Report China has been preparing for a space war. The report has claimed that Beijing has been developing various Anti Satellite weapons recently with an aim to reduce space technology disparity.

Also, Chinese National Space Agency (CNSA) has a new space station named Tiangong which means a heavenly palace. This space station is situated in the lower Earth orbit so that maximum humans can be in the Earth's orbit for a longer amount of time. Is all this related to China's preparation for a space war with the US? Let us find out in the article below.

What does the US Report State?

As per Russian website Vestnik, China is investing in weapons that pose a threat to satellites and this can be harmful for USA's national security.

It has also been stated in the report that Rear Admiral Micheal Studeman (Pentagon officer) is of the view that, "China is making such anti-satellite weapons, capable of jamming satellites, killing them."

He is also of the opinion that China may succeed in achieving its objectives in case a space war happens between the US and China.

It has been mentioned that Chinese military is gathering information about the Integrated Space Service satellites reconnaissance and position assessment, navigation and satellite communication.

The US is also afraid that  Chinese Army's Space Command has been on the task of updating its weapons and command-and-control systems that may halt the US military communications in the future.

About Tiangong Space Station of China:

China launched two space stations, Tiangong 1 and Tiangong 2 as test space stations. Tiangong 1 was launched in 2011 and was decommissioned in 2016. The CNSA lost control over it and could not control the re-entry impact point. It returned to Earth lit on fire which angered the US.

Tiangong 2 was sent to test the living conditions in space. It included growing food, conditions of the orbit, measuring radiation levels etc. This space station too dropped into Pacific in 2019. Take a look at its picture below. 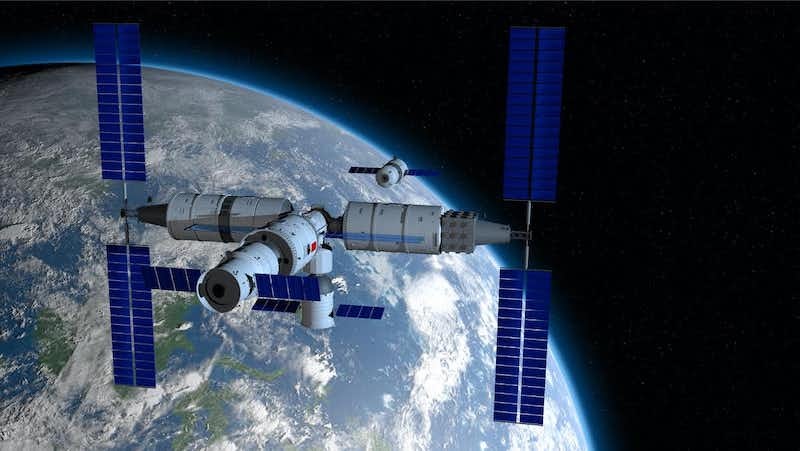 Space War Speculation in near future:

With China preparing various weapons for satellite destruction and launching near Earth orbit space stations, it becomes natural and obvious for any country to think of them being involved in developing space hegemony. Recently Russia and China both unveiled a roadmap for the International Lunar Research Station as well. If successful, the project would send Chinese and Russians to the moon by the 2030s. Through Tiangong China sent its first lunar sample return mission since the 1970s and launched the first ever roblander on the Martian surface from China. Establishing space hegemony is a different thing however and space war is different. However, China developing weapons is indicative of the same, but it is still unimaginable for any country to fight wars from space as it require immense training and technique.

What is the Blue Dot Network (BDN) by USA, Japan and Australia?