Nikola Tesla is a Serbian-American engineer and physicist who had made several inventions in the production, transmission and application of electric power. Let us read more about Nikola Tesla, his inventions and some unknown facts about him. 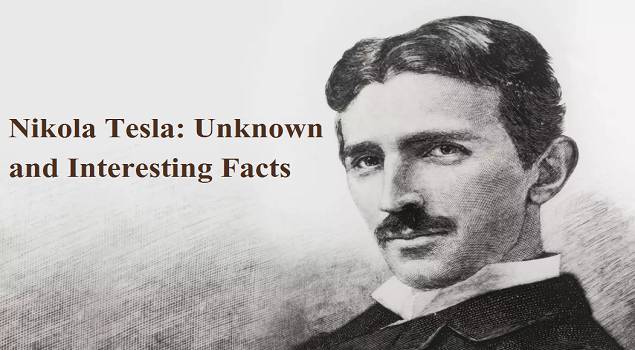 Nikola Tesla set the stage for future wireless technology and registered more than 300 patents and envisioned several inventions. He is known as the father of Alternating Current (AC). Much of his life is unknown but his inventions made a new way for several technologies and yes he was a fascinating man of mystery.

1.  Nikola Tesla was born on 10 July, 1856 in Smiljan, Croatia, then part of the Austro-Hungarian Empire. In the Serbian Orthodox Church, his father, Milutin Tesla was a Priest and mother Djuka Mandic was an inventor in her own right of household appliances. It is said that when he was born it was lightning storm in the midnight in Serbia.

2. He pursued engineering, attended the Technical University at Graz, Austria and the University of Prague. Do you know at Graz, first time he saw Gramme dynamo which can be operated as a generator and when reversed it became an electric motor and so he conceived a way to use alternating current. Later, he visualised the principle of rotating magnetic field and developed plans for an induction motor that would become his first step toward the successful utilisation of Alternating Current at Budapest.

3. Nikola Tesla went to work in Paris in 1882 for the Continental Edison Company and in 1883 he went to Strasburg for an assignment where he constructed after work hours, his first induction motor. In 1884, he went to America, in New York with only four cents in his pocket with few poems and calculations for a flying machine. With Thomas Edison, he first found employment but the two inventors were far apart in background and methods and so their separation is inevitable.

4.  He had done several works in electric light, electric motors, radio, X-ray, remote control, radar, wireless communications and robotics. He also created his famous transformer, the Tesla coil. In several inventions and cases he was not much recognised for his contributions.

5.  He has some different habits and is also known as Germaphobe. Throughout his life he had a regimented schedule. Some says that he take only two hours of sleep at night. Also, he took dinner at the same table daily earlier at Delmonico's in New York and later at the Waldorf-Astoria hotel. He had always fear of germs and required a stack of 18 napkins to wipe his dining room every night and also he wore white gloves to every dinner.

6.  In 1901 he developed the idea for smart phone technology. According to Carlson, Tesla may have a brilliant mind but he was not as good at reducing his idea to practice. Tesla’s business partner and funder was J.P Morgan, he told him a new means of instant communication that consists some stock quotes and telegram messages which he funnelled them to his laboratory. Further, he encodes them and assigns them each a new frequency. He also explained that this frequency would be broadcast to a device that would fit in hand. That is he had envisioned the smart phone and wireless internet. Carlson said that Tesla was the first person who thought about the information revolution in the sense of delivering information for each individual user.

7.  He had established his own laboratory in Colorado where he can invent and work as much as he wants. He experimented with shadowgraphs similar to those that later were to be used by Wilhelm Rontgen when he discovered X-rays in 1895. His countless work included on a carbon button lamp, on the power of electrical resonance and on various types of lighting. Tesla announced his invention in 1898 about teleautomatic boat guided by remote control.

8.  He stayed in Colorado from May 1899 till early 1900 where he had made his most important discovery that is terrestrial stationary waves. By this discovery he proved that Earth could be used as conductor and made to resonate at a certain electrical frequency. Without wires he had also lit around 200 lamps from a distance of 40 km and created man-made lighting, produces flashes measuring 41 metres. In some scientific journals it is mentioned that, he had received some sort of signals from another planet in his Colorado laboratory.

9. Because of lack of funds his work further shifted to turbines. His ideas remained in his notebooks which are still examined by enthusiasts and scientists for some clues. In 1917, Nikola Tesla awarded with Edison Medal. Do you know it is the highest honour that the American Institute of Electrical Engineers could bestow?

10.  He had few close friends. Among them were the writers Robert Underwood Johnson, Mark Twain and Francis Marion Crawford. He died in New York City of a heart thrombus on 7 January 1943. After his death, the custodian of alien property impounded his trunks which consist of papers, his diplomas, other honours, his letters and his laboratory notes. They were given to Tesla's nephew Sava Kosanovich and later housed in the Nikola Tesla Museum in Belgrade.

- Nikola Tesla, The Genius Who Lit the World, a 1994 documentary produced by the Tesla Memorial Society and the Nikola Tesla Museum in Belgrade, Serbia.

No doubt Nikola Tesla was an outstanding intellect of the world who paved the way for many of the technological developments of modern times.