What are Chemical Accident Rules in India?

The gas leak tragedy in Visakhapatnam and several other industrial accidents in recent past highlight the need to amend the chemical accident rules to minimise disaster. Let us study in detail about the Chemical Accident Rules in India. 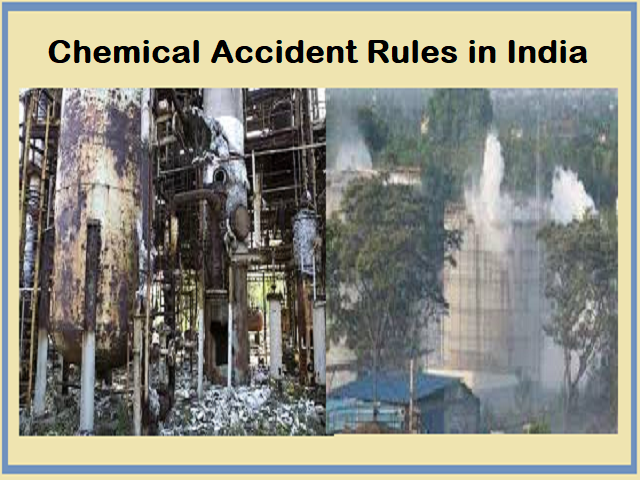 1. The accident took place in the Bhilai Steel Plant of SAIL in Chhattisgarh in October 2018 due to a blast where around 9 people died and around 14 injured. The explosion took place in a gas pipeline due to uneven pressure in the gas pipeline for the past few days the authorities revealed.

2. In May 2017 also more than 300 students of Rani Jhansi Sarvodaya Kanya Vidyalaya in Tughlakabad, Delhi were hospitalised due to gas leakage near their school. Authorities reported that it was a chemical leakage at the customs area of Tughlaqabad depot.

3. Another accident took place in the Kanpur cold storage in March 2017 where around 4 people died and around 10 were injured. The accident happened due to the ammonia gas leakage resulted in a powerful blast in a cold storage unit in Shivrajpur, Kanpur. The building was collapsed due to blast and more than 25 people were trapped. The facility was used to store potatoes.

What is Chemical Explosive and its typology?

4. In June 2014, in GAIL pipeline in Andhra Pradesh, a fire broke out after a gas leak from a pipeline. Around 15 people were killed and around 18 were injured. About 1 km radius the fire spread and people rushed out of their houses that were engulfed in flames.

5. The world's worst chemical industrial disaster that India has witnessed was "Bhopal Gas Tragedy" in 1984. Over 40 tonnes of toxic methyl isocyanate (MIC) gas leaked from an insecticide plant. It was owned by American firm Union Carbide Corporation and thousands of people were killed in the city.

After the accident, over half a million survivors suffered from respiratory problems, irritation in the eye, and blindness. After the investigations, it was revealed that the leakage occurred due to substandard safety procedures at the understaffed plant.

After the Bhopal Gas tragedy of 1984, some chemical rules in India came into existence before that the Indian Penal Code (IPC) was the only relevant law specifying criminal liability for such incidents. The government passed a series of laws regulating the environment and prescribing and specifying safeguards including Bhopal Gas Leak (Processing of Claims) Act, 1985, The Environment Protection Act, 1986, The Public Liability Insurance Act, 1991, The National Environment Appellate Authority Act, 1997, etc. Let us now discuss the Chemical Rules in India.

Following the 1984 Bhopal gas disaster, Ministry of Environment and Forest (MoEF) notified two sets of rules to regulate the manufacturing, use and handling of hazardous chemicals. These rules were:

- The major chemical accidents that arise from industrial activities are necessary to prevent.

- To limit the effects of chemical (industrial) accidents.

In addition, as prescribed by the MSIHC Rules, 1989, the occupiers of Major Accident Hazard (MAH) units are liable for the preparation of on-site Emergency Plans. While the Chief Inspector of Factories (CIFs) in consultation with district authorities are required to organise off-site emergency plans also.

The MoEF proposed in 2016 to upgrade the rules to keep pace with time. A draft amendment to rules was floated for stakeholder consultation. But the rules could not be finalised.

Some commonly hazardous chemicals are:

Therefore, these are the Chemical Accident Rules in India.

What is Nuclear Doctrine of India?