What is an Alkali and Alkaline solution?

Alkali is a basic hydroxide or ionic salt which is soluble in water. All bases are not alkali. They turn red litmus paper to blue having pH value greater than 7. Let us study through this article about alkali, its properties, uses and about alkaline solution. 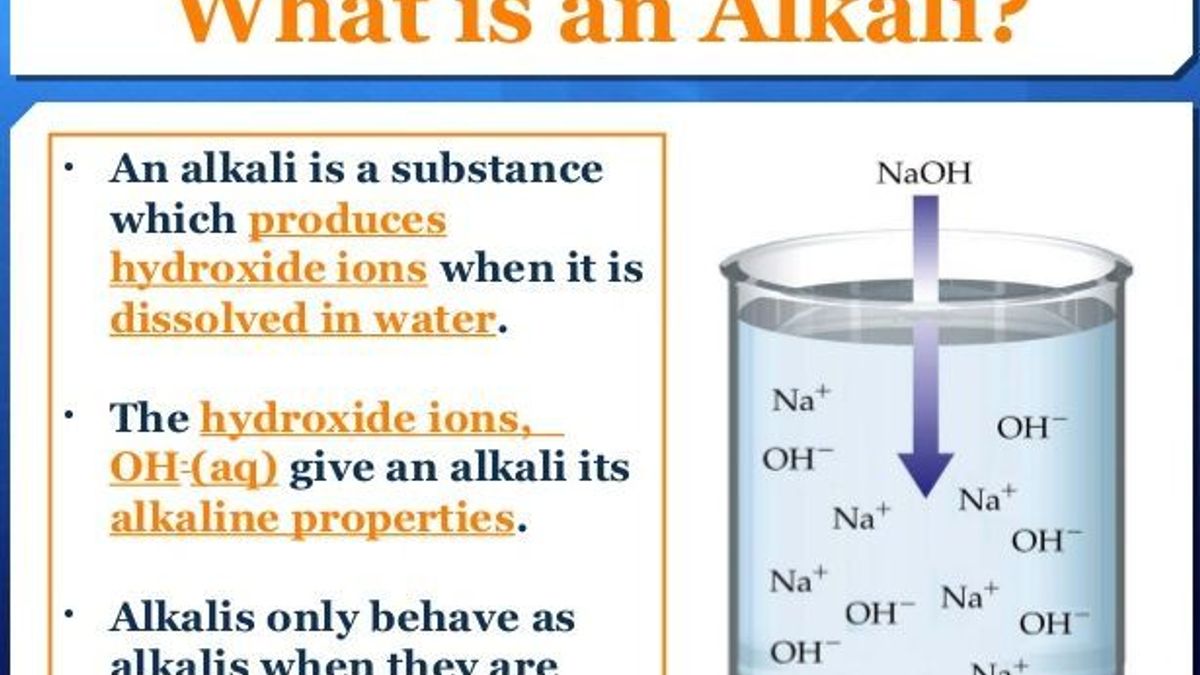 What is an Alkali and Alkaline solution?

An alkali is derived from the Arabic word 'qali' means ' from the ashes'. As ashes are mixed with water used for cleaning products and are made of alkali materials.

It is a basic hydroxide or ionic salt of an alkali metal or alkaline earth metal element which is soluble in water. They are strong bases that turn red litmus paper to blue; they react with acids to form salts. Examples are sodium hydroxide, potassium hydroxide, calcium hydroxide, magnesium hydroxide etc.

Do you know that during the digestion of food in the stomach an alkaline liquid known as bile is added to neutralise the aciditiy of stomach so, that the mixture of food, bile and enzyme turned into an alkaline solution. The enzymes in the small intestine work properly at the pH of 12. Alkali metals belong to group I of the periodic table.

- They are bitter in taste.

- They have soapy or sleepery feel.

- On pH scale the higher the number over 7 the stronger will be the alkali.

- Alkali reacts with acid to form salt and water which is also known as neutralisation reaction.

- Due to the presence of mobile ions they can conduct electricity.

- On the universal indicator colour changes to blue or purple.

What is an Alkaline solution?

How Ionic Compounds are formed?

Do you know Alkali is weak or strong?

By adding universal indicator we can find out how much alkali is strong or weak. Universal indicators can be poured into alkalis or soaked into paper and then can be touched to the alkali. Example soap, toothpaste are minor-strength alkali whereas Lye is strong alkali.

What are Alkaline earth metals?

Those metals that belong to group II of the periodic table and make hydroxides like beryllium, magnesium, calcium, strontium, barium and radium are known as alkaline earth metals.

- Alkali that is sodium hydroxide is used in the manufacture of paper, soap and detergents.

- To make soils or lakes less acidic slaked lime that is calcium hydroxide is added to it.

- In a building material calcium carbonate is used.

- In the farming to make acidic soil more alkaline potassium hydroxide is used so that plants will grow better in it.

- We know that due to too much HCl in our stomach indigestion is caused which can be minimised or cured due to taking tablets containing base like magnesium hydroxide or calcium carbonate to neutralise the acid.

- Even the sting of the bee is acidic and can be neutralised by a weak alkali like ammonia solution.

- For the industrial purpose also alkali is used in making various chemicals.

Is there any difference between Alkali and Base?

Therefore, we can say that alkali is a basic hydroxide which dissolves in water which turns red litmus to blue.