What is Solar Minimum and its impact on Earth?

The Sun is a yellow dwarf star and is the heart of the solar system. It is a hot ball of glowing gases. The Sun is said to have in a stage of Solar Minimum. What is the solar minimum and its impact on Earth? Let us study in detail. 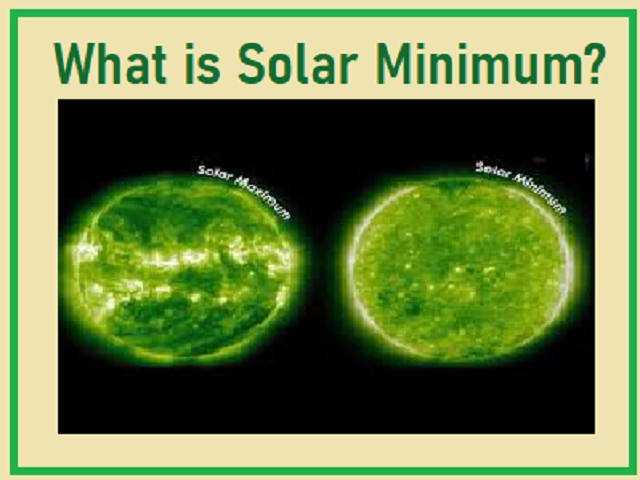 What is solar minimum

The sun appears mostly same day-in-day-out, year after year. But this is not true. The sun does change. The surface of the sun has sunspots which are strongly magnetized and they crackle with solar flares. The magnetic explosions illuminate Earth with flashes of X-rays and ultraviolet radiation. Therefore, we can say that the sun is a seething mass of activity.

What is Solar Minimum?

Approximately every 11 years, the sun goes through a natural solar cycle. It is marked by the increase and decrease of sunspots.

Let us tell you that the sunspots are visible on the surface of the sun or photosphere as dark blemishes.

Note: In 1843, the solar cycle was discovered by Samuel Heinrich Schwabe. He after 17 years of observations noticed a periodic variation in the average of sunspots.

According to NASA, scientists have already predicted about the solar minimum that it was coming because it is a regular aspect of the sun's cycle. In 2014, the sunspots were peaking and low points beginning in 2019.

As discussed above solar minimum and solar maximum are the two extremes of the Sun's 11-year activity cycle. When the Sun is at its solar maximum cycle, it has sunspots, solar flares erupt. Skywatchers may see several auroras.

Pesnell told that "at the time of solar minimum we can see the progress of long-lived coronal holes".

Do you know about coronal holes?

They are vast regions in the atmosphere of the sun where the sun's magnetic field opens up and allows streams of solar particles to escape the sun as the fast solar wind.

Further Pesnell says that throughout the solar cycle we see these holes, but during solar minimum, they can last for a long time maybe six months or more.  From coronal holes when solar wind streams flow can cause space weather effects near Earth when they hit the magnetic field of the Earth.

What are the Near-Earth Objects (NEO)?

What is the impact of this phenomenon on Earth?

These effects can cause short-term disturbance of the Earth’s magnetosphere known as geomagnetic storms, auroras and disrupt communications and navigation systems. During solar minimum, the space weather will also affect the upper atmosphere of the Earth on satellites in low Earth orbit changes too.

Basically, the upper atmosphere of the Earth is heated and puffed up by the ultraviolet radiation from the sun. In low Earth orbits, satellites experience friction as they skim through the outskirts of pour atmosphere. This type of friction generates drag, causes the satellite to lose speed over time and eventually fall back to Earth.

No doubt Drag is a good thing for the space junk, natural and manmade particles that floats in the orbit around the earth. It also helps to keep the low Earth orbit clear of debris.

Now let us see what happens during solar minimum. The natural heating capacity mechanism subsides. The upper atmosphere of the Earth cools and to some degree collapse. In fact, space junk tends to hang around, without a normal amount of drag. During solar minimum, various unique space weather effects get stronger.

Also, during solar minimum, a number of galactic cosmic rays that reach the upper atmosphere of Earth increases. Also, the galactic cosmic rays are high energy particles advance toward the solar system by distant supernova explosions and other aggressive events within the galaxy.
The magnetic field of the sun weakens during solar minimum and provides less shielding from these cosmic rays. This can cause an increased threat to astronauts travelling through space.

According to NASA’s Global Climate Change, in the next few decades, we could go into a stage of Grand Solar Minimum. That is the Sun becomes quieter, experiencing much fewer sunspots and giving off less energy. Last time it had occurred between 1650 and 1715 during the Little Ice Age within the Northern Hemisphere of the Earth. It is because when a combination of cooling from volcanic aerosols and low solar activity produced lower surface temperatures.

So we can say that solar minimum brings about several changes to our sun.

Why is Antarctica turning green? Reasons and Effects