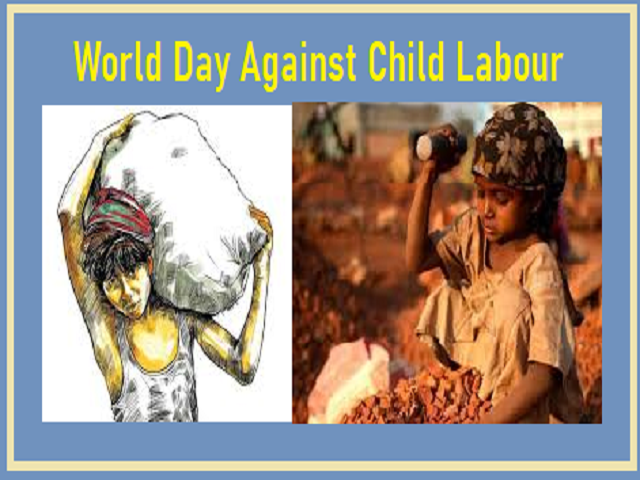 World Day Against Child Labour was introduced in 2002 by the International Labour Organisation. The day provides an opportunity and urges the need to generate an environment for children to grow and live a dignified life and also to fight against child labour throughout the world.

Poverty is one of the main reasons for child labour because of which children are forced to left their school and opt for minimal jobs to support their parents for their livelihood. Moreover, some are forced into child labour by organised crime rackets.

The Day not only focuses on the suitable environment required for the children to grow and prosper but also provide an opportunity to gain support from governments, civil society, schools, youth, women's groups and media to participate in the campaign against child labour.

The theme of World Against Child Labour 2020 is "Protect children from child labour, now more than ever". Due to COVID-19 pandemic, the resulting economic and labour market have a huge impact on the lives of people and livelihoods. Unfortunately, children are often the first to suffer. The crisis can also push millions of vulnerable children into child labour.

The theme of World Day against Child Labour 2019 was “Children shouldn’t work in fields, but on dreams”. The theme focuses on the development of the children working in agriculture sector throughout the world. As around 152 million children are still in child labour. And it is said that in almost every sector child labour exists but seven out of every ten is in agriculture. The International Labour Organisation (ILO) celebrates 100 years in 2019 in promoting social justice and decent work for children through Anti Child Labour Day.

Let us tell you that The International Labour Organisation (ILO) launched the World against Child Labour Day in 2002 to focus attention against child labour and the action or work needed to eliminate it. It also looks forward towards the UN Sustainable Development Goal Target 8.7 which was set by the international community to make an end to child labour by 2025.

This day also focuses on the ratification of the protocol of 2014 to the Forced labour Convention to protect the rights of adults as well as children.

The theme for World Day against Child Labour 2018 was "Generation safe and Healthy".

The theme for World Day against Child Labour 2017 was "In conflicts and disasters, protect children from child labour”.

The theme for World Day against Child Labour 2015 was "NO to child labour – YES to quality education!”.

In 1973, ILO convention number 138 was adopted and focused on the minimum age for employment. It aims the member states to raise the minimum age of employment and to abolish child labour. In 1999, the ILO convention number 182 was adopted and was also known as "Worst Forms of Child Labour Convention". It aims to take necessary and immediate action to eliminate the worst form that is child labour.

This day mainly focus on the children development and it protects the right of education and dignified life for the children. Therefore, it is important to achieve the Sustainable development Goals (SDGs) by 2030 as propagated by the UN. Several organisations, ILO etc. are making efforts to curb the child labour. But we should also be responsible and take our duties to help in eliminating child labour. It is correctly said that the child that comes out of child labour comes to know his or her potential and self-worth. They began to enjoy life, human rights and live a dignified life. No doubt such children will also contribute to the economic and social growth of the country and also of the world. Children are the future of the country, isn’t it!

Some Facts about Child Labour
According to the UN,
- Around 152 million children between the ages of 5-17 were in child labour and almost half of them that is around 73 million are in hazardous child labour.

Stop Child Labour, Protect the right of children, educate them, and support them!